In what has been described as “a space walk for the ages,” surfer Tom Dosland recently took a terrifying tumble from a monster wave.

In what has been described as "a space walk for the ages," a surfer recently took a terrifying tumble from the crest of a mammoth ocean wave.

Cameras were rolling as American surfer Tom Dosland ascended a 40-foot wave at Jaws, a popular surf break in Hawaii. Things quickly took a turn for the worse, however, as he was thrown from the top of the wave and forced to endure a terrifying 20-foot fall back into the water: 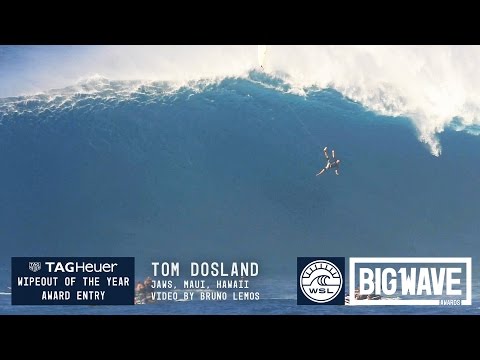 Thankfully, Dosland escaped the ordeal unscathed - although his board was not so lucky - and returned to the water the next day.

"I instantly realized that this wasn't going to end well for me," he recounted in a recent interview with Surfer magazine.

"I was free-falling for a while. It felt like I jumped off a cliff. That's when my leash stretched out all the way and flipped me over head-first. From there, I hit the face and it was just a brutal beating, like I was in a car crash."

The 2014 Billabong Pro Tahiti surfing competition has just concluded, its contestants braving giant walls of water to take home top prize in the annual Association of Surfing Professionals event, a jewel in the organization's pro tour. Let's watch these skilled wave-catchers in action, and, sometimes, in sprawling wipeouts. Here Bede Durbidge, from Australia, drops into a wave.

Kelly Slater, of the United States, rides a wave. Slater, an 11-time world champion and four-time winner of this event, would go on to take second place in the competition.

Bede Durbidge cruises toward the shore.

11 Swells Every Surfer Needs to Visit in a Lifetime

U.S. surfer Kolohe Andino might as well be walking on water.

Things don't always go according to plan, even for these graceful athletes. Australia's Mick Fanning gets upended in a wipeout.

beauty). In the end, it came down to Brazil's Gabriel Medina vs. Kelly Slater, of the United States.

Medina flies through the air after surfing a wave during the final round.

Medina ended up defeating Slater, for his third win of the surfing year. Here he poses on the victory podium. At right is Slater, the runner-up.