Kelly Slater won the Volcom Pipe Pro in Oahu. Earlier, he helped save a mother and toddler from a rogue wave.

"Conditions are good to epic." That was the official word on the last day of the Volcom Pipe Pro surfing competition on Oahu's North Shore.

After the week pro surfer Kelly Slater had, let's go with epic.

In terms of waves, the beautiful barrels came rolling for Volcom Pipe Pro contestants. The major multi-day competition took place at the famous Banzai Pipeline starting at the end of January.

Conditions there matter, and you know you're in for a treat when Red Bull calls it "the best contest surf we've ever seen."

Slater was competing against three of the world's best surfers, but he stepped up to gain 3,000 points for the $16,000 win. Although he's an 11-time world champion, this was his first win there in two years. Volcom's recap described a final that "saw barrels fire off like cannons."

Take a look at these glorious highlights: 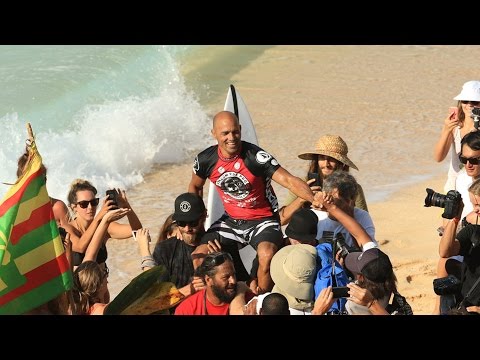 But earlier in the week, Slater was taking on a very different wave. While standing on the beach near a lifeguard station in Oahu watching the huge swells, he spotted an enormous rogue wave headed for the shore. A woman and her toddler on a footpath were directly in the trajectory, Outside Magazine reported.

Slater called out but they didn't hear him. The wave was already sweeping them across the busy Kamehameha highway. Slater and several lifeguards leapt into action, helping the two out of the water. Other than cuts, bruises, and sand in the mouth, they were OK.

The woman turned out to be Sarah White, whose pro photographer husband Chris was shooting the surf at the time. They regularly travel to Oahu during surfing season, but this was their first visit with their 22-month-old son, Van.

"For some random reason I stopped there when I normally don't and happened to be there," Slater wrote on Instagram, commenting on Chris White's update about the rescue. "So glad all is well and we can (someday) laugh about it. Van's first wave was a huge one!"

White expressed gratitude to Slater, the lifeguards, and the surf gods for the rescue, writing on Instagram that he was "so thankful my family is alive and safe." The surf gods certainly smiled on Slater, too.

Requiring balance, poise and determination, surfing can be a challenging sport that's probably not for everyone. But that doesn't mean that onlookers can't get a vicarious thrill by watching a surfer conquer monster waves from the safety of their beach. Surfing spectacles can draw huge crowds, too. Just take a look at this photo from the Australian Open of Surfing at Manly Beach in Sydney, Australia. As great as Manly Beach might be, however, there are better sight-surfing opportunities to be had elsewhere in the world. In this slideshow, explore some of the best sites in the United States and abroad for being a surfing spectator.

One of the most popular destinations for professional surfers, the Banzai Pipeline along Oahu's North Shore has attracted surfers and spectators in droves. Although anyone can sit along Banzai Beach watching surfers take to their boards, only those with some experience under the belt should attempt to ride these waves. The winter months are the prime season for surfing the Pipeline, which shouldn't deter spectators since the temperatures even in the coldest months tend not to dip below the mid-60s.

If you're in Hawaii anyway to see some surfing, then island hopping is a must to get the most bang for your buck. After stopping by Oahu's North Shore, head over to Maui to check out Pe'ahi, better known as Jaws. Jaws Beach boasts some of the tallest and fastest waves of anywhere in the world. In order to get on top of these waves, surfers need to be towed out. Once there, they will ride waves 25 to 50 feet high, or more. Spectators of all stripes are welcome, but only the most experienced should consider attempting these waves.

The Pipeline and Jaws are probably the most impressive of the many surfing sites available in Hawaii. The state has so many great surfing destinations that we'll leave the rest off to give other places a chance. But there is one more spot in Hawaii that bears its own mention: Honolua Bay. The bay offers not only giant waves to challenge surfers and keep spectators interested. It also offer whale watching for whenever visitors feel like taking a break from surfing. The one major downside to Honolua Bay, however, is a persistent problem of theft from motor vehicles, so try not to bring your valuables with you to the beach.

Hawaii isn't the only place in the United States for spectators to watch surfers take to the waves. Maverick's in California is among the top destinations for big-wave surfers. Like Jaws, only experienced professional surfers with expert towers should attempt to surf here, with waves that can reach over 80 feet high. In fact, just last year big-wave surfer Sion Milosky died from drowning during an attempt at Maverick's. The site may be dangerous for surfers. But when all goes well, a successful ride can be a thrill for onlookers.

The Cortes Bank in California is the site at which Mark Parsons broke the Guinness World Record for the highest wave ever surfed. To win the title, Parsons rode a wave over 70 feet tall. Although dedicated surfers are motivated to make the trip for the multi-story waves, spectators might have a little trouble getting to this relatively remote and somewhat inaccessible location within Los Angeles county. However, due to its reputation, Cortes Bank still manages to draw in the crowds.

If you don't feel like waiting six months to see the peak surfing season at some of the best surfing sites in the United States, then you might want to remind yourself that it's winter in the southern hemisphere. The Superbank along Queenland's Gold Coast draws its fair share of surfers -- during peak season, upwards of 200 can be spotted from the shore -- and crowds of spectators as well. Visitors should, however, be prepared for a long walk back to their cars once they're ready to call it a day, with more than a mile separating the beach from the nearest parking area.

The Margaret River region is home to two of the best surfing destinations in Australia: Yallingup and Prevelly Park. Yallingup is nestled in a tiny village in southwestern Australia and offers different waves for various surfer skill levels, allowing spectators who also happen to be novice surfers to take part. Located some 25 miles south, Prevelly Park offers the kinds of monster waves that only experienced surfers should attempt. With so much surfing packed into the region, the site is ideal for a surfing enthusiast looking for a real off-the-beaten-path adventure.

Surfing in Bali, Indonesia, has attracted visitors ever since it first became popular in the 1970s. For surfers, Bali offers opportunities for all experience levels. Kuta Beach might cater to beginners starting to pick up their form and watch locals show off what they can do. Uluwatu, on the other hand, has massive swells that can produce waves 30 feet high, and is only for the most experienced surfers. Each of these sites has attractions that complement the surfing spectacle for visitors, ranging from sport fishing at Kuta to visiting the cliff-side temple at Uluwatu.

If the French Riviera is a little too posh for your beach vacation this summer, why not try the slightly less fancy Soorts-Hossegor on the southwestern coast of France, the site of what is considered the best surfing destination in Europe? Hoosegor can draw large crowds to see its surfers and hosts the Quiksilver Pro France competition annually.

Check out More Slideshows from Discovery.com...

How to Brew Your Own Beer (in an Apartment) Best and Worst of Summer Blockbusters: What To See, What To Skip, Who To Watch for 8 Surprisingly Fuel-Efficient Luxury Cars The Wildest Places Left on Earth