Our Supermassive Black Hole Could Be ‘Supercharging' Stars' Magnetism

For the first time, the magnetic fields of stars have been included in computer simulations, giving a clue about how the stars in the center of our galaxy respond to straying too close to a monster black hole.

For a supermassive black hole that's so close to us, we still have a lot to learn about Sagittarius A* (Sgr A*), the singularity in the center of the Milky Way.

As astronomers work to learn more about the environment it, a new paper in Astrophysical Journal Letters makes predictions about what would happen to young, highly magnetized stars in Sgr A*'s vicinity. It's the first time a star's magnetic field has been included in simulations where a black hole tidally disrupted a star, meaning the star is pulled apart and stretched.

"Magnetic fields are a bit tricky numerically to simulate," James Guillochon, an astrophysicist at the Harvard-Smithsonian Center for Astrophysics, told Seeker. In the past, it's been hard to put magnetic fields in context with other influences on a star, such as gas pressure and gravity. This is especially true towards the boundary or atmosphere of the star.

RELATED: This Is How to Feed Our Supermassive Black Hole

The simulations show that if a star gets a "glancing blow" from a black hole, it can survive the encounter and its magnetic field amplifies strongly, by a factor of about 30. But if the star gets very close to the black hole, the star is tidally destroyed and the magnetic field maintains its strength.

"One of the immediate impacts is that we might see highly magnetized stars in the centers of galaxies, and that includes our own galactic center," Guillochon added. "We also would expect this to affect the resulting flare that arises from the disruption of the star by the supermassive black hole. Half the matter of the star falls on to the black hole and feeds it, and that generates a luminous flare of a billion or 10 billion solar luminosities."

A star disruption should theoretically be visible in our own galactic center, but Guillochon says that only happens about once every 10,000 years or so. Luckily, the stream of the disrupted star can persist for centuries, feeding the black hole.

Guillochon co-wrote a paper a couple of years ago about G2, a gas cloud falling into the galactic center in 2014 that produced far less activity than expected. It suggests that G2 could have been produced by the disruption of a red giant star, and its gas envelope is still feeding the black hole today.

He suggested that G2-like clouds would form by "clumping up" due to cooling instabilities, which would put regular deliveries of a G2-type cloud once every decade. When the material is highly magnetized, co-author Michael McCourt has previously suggested that the fields can help stabilize the clouds and prevent them from breaking apart. If the pattern holds true, highly magnetized clouds would continue to pass near the black hole over the next several decades.

That said, the challenge of learning about stars that survive disruption in the galactic center is they tend to be lower mass and hard to see. How many of them are magnetized, and how strongly, remains an open question, Guillochon said. Below is a short animation simulating a star's magnetic field being torn apart by a black hole. 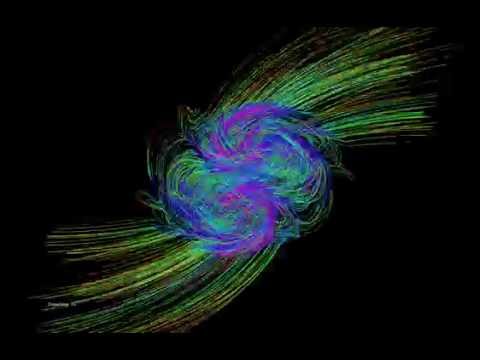 WATCH VIDEO: The Race To See The Black Hole At Our Galaxy's Core