Once thought to be the brightest supernova ever recorded, the intense flash in the center of a distant galaxy has more sinister roots: It was a star being blended by a monster black hole.

Supermassive black holes are known to occupy the cores of the vast majority of galaxies, eating any material - dust, gas, stars, planets, aliens - their host galaxies can provide. But they rarely eat quietly. As graphically demonstrated in a galaxy some 4 billion light-years away, an unfortunate star strayed too close to the rapidly-spinning supermassive black hole in its galaxy's center, becoming a stellar smoothie of sorts.

Spotted by the All Sky Automated Survey for SuperNovae (ASAS-SN) project, the event in 2015 was recorded as the brightest supernova ever seen, but now a group of researchers don't think it was a supernova at all and point to one of the most destructive events known in the universe.

The event, dubbed ASASSN-15lh, was so bright that it was 20 times brighter than the total light output of our galaxy and its identification as a black hole-blended star has thrown the identification of other luminous supernovae into doubt.

"We observed the source for 10 months following the event and have concluded that the explanation is unlikely to lie with an extraordinarily bright supernova," said Giorgos Leloudas at the Weizmann Institute of Science, Israel, and the Dark Cosmology Center, Denmark in a statement. "Our results indicate that the event was probably caused by a rapidly spinning supermassive black hole as it destroyed a low-mass star."

Known as a "tidal disruption event," ASASSN-15lh was triggered by a star getting trapped in the black hole's gravitational well. Extreme tidal forces then caused incredible shear across the star, completely distorting it. This process, known as "spaghettification", pulled the stellar material into a long ribbon wrapping around the black hole, dragging the gases into its event horizon - the point at which nothing, not even light, can escape. During this time, extreme relativistic forces converted huge quantities of matter into pure energy, generating the record-breaking explosion that echoed over 4 billion light years to reach telescopes on Earth.

But observing this kind of energetic event so far away required intense follow-up observations to confirm that it was, indeed, not just a really bright supernova. After detection by ASAS-SN, the researchers used observations by the Very Large Telescope (VLT) at ESO's Paranal Observatory in Chile, the New Technology Telescope (NTT) at ESO's La Silla Observatory (also in Chile) and the Hubble Space Telescope to understand what was behind the explosion. Over the 10 months, ASASSN-15lh went through distinct phases consistent with a star being ripped to shreds. Also, as the explosion happened in a red, massive galaxy where superluminous supernovae are unlikely - ultraluminous supernovae typically occur in blue, star-forming dwarf galaxies. 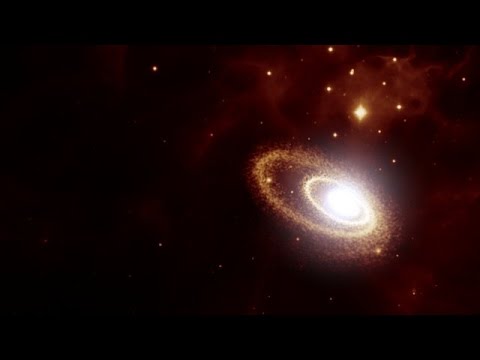 Although a tidal disruption event is the most likely candidate, the black hole triggering the event has to be a very specific type of black hole. Thought to be around 100 million times the mass of the sun, the black hole eating this star is also spinning very, very fast. Known as a Kerr black hole, this rapidly-spinning object will violently rip up anything that comes too close.

In short, astronomers have seen what happens when a star gets too close to the supermassive blender in the center of a galaxy, and the result is an ultra-bright fireworks display.

WATCH VIDEO: The Race To See The Black Hole At Our Galaxy's Core