A group of Scandinavian stunt riders are taking snowmobiles where they haven't been before.

Antti Pendikainen soared over the enormous snowy cliff on his snowmobile. Although he's a stuntman, Pendikainen looked like he was doing a Swedish remake of "Thelma and Louise." This can't end well, I thought to myself, holding my breath.

The vehicle exploded on impact with the snow.

Fortunately Pendikainen had parachuted to safety first. That was also just a takeoff test. The goal for him and the rest of the team gathered in Riksgränsen, Sweden, was to get the whole snowmobile up into the air. Welcome to snowmobile paragliding, a new extreme activity invented by a group of Scandinavian stunt riders called the Stunt Freaks Team.

"The locations where you film ain't always the safest," one of the team members says in a video, right before Pendikainen's second attempt. "This one, this may be the most, most hardcore."

For the actual run, the Finnish stuntman set off in a snowmobile attached to paragliding gear. A wide purple and white striped fabric wing rose up behind him. The cliff's edge was hardly a bump as the contraption continued to fly. It was such a chill ride that Pendikainen pulled an energy bar out of his pocket and took a bite.

I was worried about the landing - and frankly maneuvering the wing seemed to require a lot of effort - but he pulled it off.

Trust the Scandinavians to take snowmobiles where they've never gone before. Between this and Swedish freestyler Daniel Bodin's recent double backflip, I'm also starting to understand more swear words in other languages. If anything calls for some enthusiastic expletives, it's surviving these intensely dangerous stunts. 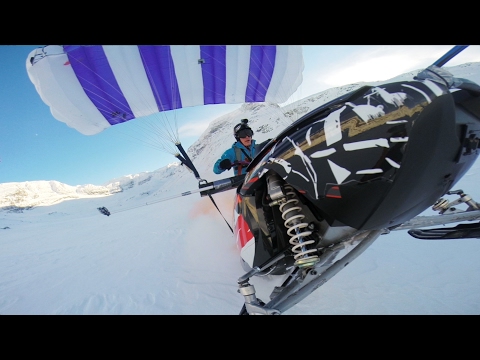