Electricity is created from the simple friction between two substances.

Out at sea, gentle waves provide power for thousands of homes. In cities, dancefloor moves generate electricity for nightclubs. In the countryside, hikers use leg power to recharge their phones.

It is an alluring goal of clean, reliable power free from geo-political risks -- and scientists said it lies within reach, thanks to a smart way to harvest energy called tribo-electricity.

Researchers at the Georgia Institute of Technology said they had built a simple prototype device that converts stop-start movement into power.

Waves, walking and dancing -- even rainfall, computer keys or urban traffic -- could one day be harnessed to drive sensors, mobile gadgets or even electricity plants, they contend.

Zhong Lin Wang, a professor of materials science and engineering, described the invention a breakthrough. "Our technology can be used for large-scale energy harvesting, so that the energy we have wasted for centuries will be useful," he told AFP by email.

"Tribo-electric" is a modern term with ancient roots -- from the Greek word for "rub." Its electricity is created from friction between two substances causing a charge of electrons to be transferred from one to the other.

It commonly happens, for instance, when plastic-soled shoes are in contact with a nylon carpet, causing the snap of static discharge when one's hand touches a metal doorknob. Because tribo-electric is so unpredictable, it has been generally shunned as a power source.

The preferred method has been magnetic induction -- a turbine driven by nuclear- or fossil-powered steam or water.

But, in a new study published in the journal Nature Communications, Wang's team said they had overcome key hurdles to converting a haphazardly-generated electrical charge into current. Their prototype comprises a disc about 10 centimetres (four inches) across, designed to show the potential from a small, portable generator moved by ambient energy.

Inside are two circular sheets of material, one an electron "donor" and the other an electron "receiver," brought together through rotary movement. If the sheets are separated, one then holds an electrical charge isolated by the gap between them.

Sandwiched between the two discs is a third disc with electrodes, which bridges the gap and helps a small current to flow. At a top speed of 3,000 revolutions per minute, the device generated 1.5 watts.

This gave it an energy efficiency of 24 percent, three times greater than piezoelectric, the previously best source of mechanical electricity harvesting -- and as efficient as magnetic-induction turbines.

It can run on a gentle wind or tap water, or "random jerky motions," including human movement, to provide the rotation, Wang said. "As long as there is mechanical action, there is power that can be generated."

The prototype used copper for the rotator and gold for the electrodes in lab tests, but these could easily be substituted for low-cost synthetics, he said. The team is working on ways to scale up tribo-electric energy for harvesting power from the ocean. Watch a video below to see how the technology works. 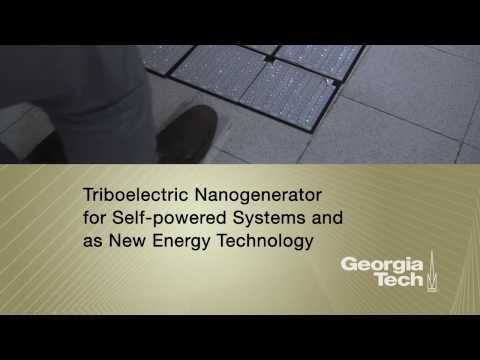 Power is generated when two substances contact one another via stomping or sliding. This effect could be used to produce power for portable electronic devices.

Before the dawn of inventions, most of the work people did was powered by sheer human strength. "Historically, if you go way back, everything was human-powered," said Mark Archibald, chair of the Human-Powered Vehicle Committee of the American Society of Mechanical Engineers. But then the motor came along and did much of the heavy lifting for us.

Today many people are turning back to human-power as an energy source. It's free, it's clean and it's good for the heart.

The following is a look at some of the ways energy can be harvested from people -- for both transport and for electrical devices.

Scottish cyclist Graeme Obree designed this face-down, headfirst bike, which lets him pump his legs horizontally instead of up and down. The design improves the aerodynamics by reducing drag. In September 2013, Obree tested the bike in Battle Mountain, Nev., and reached 56.62 mph, breaking the record for prone cycling’s previous speed of 54.9 mph.

Currently, the fastest machine powered by a human is the VeloX3, designed by the Human Power Team Delft from

In 2010 a team of students from the University of Toronto made a successful slight of the first human-powered airplane. Unlike previous human-powered airplanes, the Ornithopter, as it was named, flapped its wings like a bird. It flew for 19.3 seconds, covered a 158 yards and reached an average speed of 15.8 miles per hour. The same team is working on its own version of a human-powered helicopter.

At the University of Maryland a team successfully flew the Gamera II, setting a record for a human-powered helicopter flight. Although they did not achieve the duration and height necessary to win the Sikorsky Prize, which is given to a team that can reach 10 feet and hover for 60 seconds, they were able to fly a few inches off the ground for 50 seconds -- more than anyone before them.

The first designs for a human-powered sub date to the 16th century, and there was one -- the Confederate submarine H.L. Hunley -- that made an appearance during the Civil War.

Steven Polowy, president of the Human-Powered Submarine Team at the University of Michigan, noted that such subs have technical constraints all their own. "The big one is air," he said, because a person exerting him or herself uses a lot. Another issue, he said, is efficiency -- his team used a stair-stepper motion to power the propellers instead of bicycle-like pedaling.

Humans move around a lot. We walk, jump and dance. So why not use all that kinetic energy? Via piezoelectric devices, that's now possible. Piezoelectricity comes from substances that generate current when they are compressed, bent or stretched. The most common application is lighting stoves (the lighter uses a piezoelectric material to generate a spark).

Now some inventors have proposed using these materials in objects that humans come into contact with and move. For example, dance floors, roads or sidewalks. Walking or even driving on the surfaces would put pressure on embedded piezoelectric materials, which could then send an electrical current out to be used to power lights.

Other ideas include embedding these materials into backpacks that would generate power for soldiers, who might be walking far from base camp. Tiny devices embedded into special knee braces could also create energy from walking.

In 2008 the East Japan Railway Company experimented with a power-generating floor, which produced enough to power ticket kiosks.

Bicycles are the most obvious human-powered transport today, but HumanCar Inc., wants to build a car that can go short distances powered by human muscle. It isn't much like the pedal-cars some might remember from when they were kids; this one moves via a rowing-like motion and the wheels are powered with a gearing system not unlike that of an old-fashioned sewing machine (in which a wheel is made to go faster via a flywheel).

The car also includes an electric motor for longer trips. An added bonus: under human power, the car can charge small electronic devices. The top speed is only about 30 miles per hour, so it isn't made for highways. If you want to buy one, it will cost, though: about $85,000. HumanCar CEO Chuck Greenwood notes that there are only a half-dozen units built and that's why they cost so much; in the future he hopes to get them mas-produced.

Sometimes called a cycle rickshaw, these have been a staple form of transport in countries such as India, China and Bangladesh (where they are brightly decorated). While their use is decreasing in Southeast Asia, it is rising in cities like New York, where there are 1,112 licensed drivers and 850 pedicab license plates (the number is capped by law). Other cities where they have become popular with tourists include Hamburg, London, and San Francisco.

Several designs for powering implanted devices with blood sugar have been floated in the last few years, most based on the fuel cell. One recent idea uses it to power brain implants, while another was proposed for pacemakers. This might be something like what the writers of The Matrix had in mind, though you'd need to still feed the humans and you wouldn't get much current. It is, however, enough for the average medical device.