Construction on the controversial Dakota Access Pipeline will be halted, but many aren't convinced that this is the end.

After the U.S. Army Corps of Engineers announced on Sunday that construction on the controversial Dakota Access Pipeline would be halted, protesters who had fought the pipeline's route on behalf of the Standing Rock Indian Reservation greeted the news with elation.

They also began preparing for a protracted struggle over the issue as Donald Trump's administration prepares to take office.

"We're hoping that it's the end of it," Ashleigh Jennifer Parker, U.S. Coast Guard veteran and head of public relations for the group Veterans Stand for Standing Rock, told Seeker. But she noted that opponents of the oil pipeline realize that there is no "100 percent" guarantee that their victory will be lasting.

The Army Corps of Engineers decided not to approve an easement that would allow the pipeline to pass under the Standing Rock reservation's water supply, Lake Oahe in North Dakota.

The declaration came as more than 2,000 veterans of the U.S. armed forces descended on a sprawling protest encampment just north of Standing Rock to protect pipeline opponents from the threat of militarized police and Dakota Access Pipeline security.

Members of the veterans group expressed concern that President-elect Donald Trump could reverse the Obama administration's decision to stop construction in the Standing Rock area after he's sworn in on Jan. 20.

In fact, the pro-pipeline Midwest Alliance for Infrastructure Now issued a statement expressing optimism that the construction will recommence under Trump.

"With President-elect Trump set to take office in a 47 days, we are hopeful that this is not the final word on the Dakota Access pipeline," said spokesperson Craig Stevens.

With the prospect of a longer fight ahead, the protesters - who prefer to identify themselves as water protectors - expect to remain at the Oceti Sakowi Camp, as the protest site is called.

"There was an air of elation and celebration when the news broke. At the same time, people aren't skipping a beat," Joe Conte, who traveled to the camp from San Francisco, told Seeker. "Winterization efforts are still underway. Construction crews are working into the night to ensure all water protectors have the shelter they need to survive the winter. It's recognized that this is an important win but not the end of the battle. The commitment to a peaceful demonstration of prayer continues." 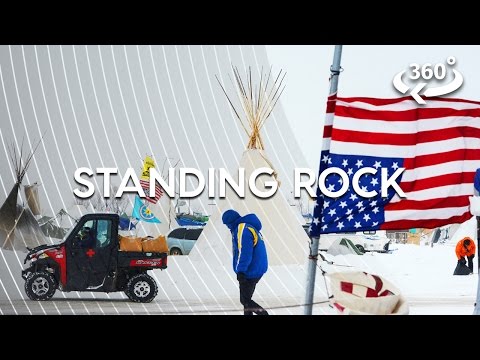 Volunteers from Veterans Stand for Standing Rock will remain at the camp as well. The group was started by Michael A. Wood Jr., a retired Baltimore police officer and veteran, and Wesley Clark, a veteran and screenwriter. The pair were inspired to get involved when they saw the degree of force that the authorities had deployed against civilians who had taken up Standing Rock's cause.

Over the course of the months-long protest, there were several instances of police throwing concussion grenades into the crowds and spraying them with water cannons in below-freezing temperatures, putting them at risk of hypothermia.

"For veterans, we take an oath when we enlist, and it says we swear to uphold the Constitution and protect it against all enemies foreign and domestic. And for me, this is a domestic enemy." Parker remarked to Seeker.

The estimated $3.8 billion pipeline would have carried 470,000 barrels of crude oil a day from western North Dakota to Illinois, where it would connect with an existing pipeline. But protesters halted the building of a section that would go beneath Lake Oahe, threatening the Standing Rock reservation's supply of drinking water and putting sacred Native American sites at risk.

North Dakota Governor Jack Dalrymple issued an evacuation order on November 28, stating that everyone must leave the camp due to severe weather conditions, but the pipeline's opponents, many of whom had been living at the site for months, defied the edict.

"It's about a pattern of disrespect towards people without power, in terms of at least military might and economic powers and their ability to manipulate things," said Emery Meyer, a protester from Oregon. "For me, it's about going back to the roots of how things came to be this way, because Standing Rock is simply one example of many, many things that are horribly wrong with our culture and our country."

Meyer's brother Ralph said that he felt the same way, and sharply criticized the police actions he's witnessed since arriving at Oceti Sakowi, where tribes, activists, and allies had confederated against the pipelines.

"We saw women and children and grandmas and men and warriors alike on their knees with their hands in the air praying while they were being tear-gassed," Ralph Meyer told Seeker. "They were being shot with mace and rubber bullets."

"It's really heartbreaking to see what's happening here," he went on. "These lands are treaty lands, reservation lands, and the same thing that's been happening for 500 years is happening today."

The pipeline's opponents will stay at the camp to ensure the protection of tribal interests, and Veterans Stand for Standing Rock have pledged to support them for as long as it takes.

"We are planning on being involved until we are told to back down from the tribe or until it is finalized that they will not be building the DAPL," Parker told Seeker, referring to the pipeline. "Energy transfer partners clearly feel that this decision by the Army Corps was a political decision by the Obama administration and that it's actually baseless. We want to make sure that's not the case."