Palestinian Mohammed Alsheikh took the one-minute record for the most full-body revolutions while holding a chest stand.

Mohammed Alsheikh certainly lives up to his "Spider-Boy" nickname.

Last week in Amman, Jordan, the 13-year-old Palestinian with an unbelievably flexible spine contorted himself so his chin rested on the floor. Counterbalanced by his arms, he whipped his legs around his head in a circular motion, repeatedly touching his toes on an X laid out on the floor, several inches from his nose.

He had only one minute to do as many rotations as he could in an attempt to break the Guinness World Record set by the 30-year-old British circus performer Leilani Franco: 29. Amid shouts of encouragement in Arabic - "Aiwa! Aiwa! (Yes! Yes!)" - Alsheikh's feet whipped around so quickly they were a blur.

A little over two years ago, Alsheikh entered the reality TV competition "Arabs Got Talent," and made it all the way to the finale. In his grand finale performance, he emerges from a wicker basket wearing a shiny sky blue unitard, blue-and-white facepaint, and casually contorts his legs over his face before launching into a performance that showed off his ridiculous flexibility (video).

In Jordan, the young contortionist kept tapping the X with his toes as the enthusiastic whistles from friends and family grew louder. When the Guinness World Records official shouted to stop because the minute was up, Alsheikh nearly kept going. He pushed himself into a split position and looked up. He'd completed 38 full-body revolutions while holding a chest stand.

When he was given the world record certificate, Alsheikh told Guinness he was excited about the achievement, adding that "I managed to exceed the previous record holder, who was a lot older than me." In addition to being a source of competition, contortionists like Leilani Franco have inspired the Palestinian, who is also the youngest of eight children.

A year ago, he told AFP TV in a video that he aspired to achieve a Guinness World Record. His mother explained to the outlet that doctors had X-rayed him and said that while his flexibility was rare, it didn't pose a danger to his health.

After appearing on "Arabs Got Talent," Alsheikh practiced with coach Mohammad Lubbad and pursued his dream. War in Gaza interrupted his training, but he persisted. Watch him spin his way into the record books here: 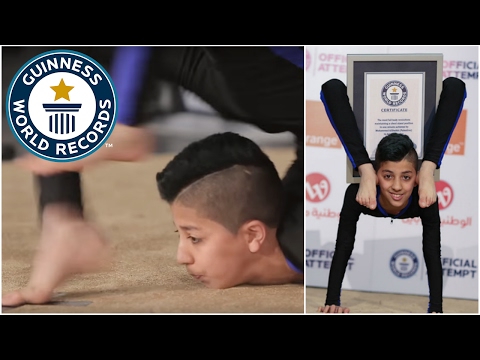