Sparring Mantis Shrimp Try to Win on Points, Not Knockouts

The crustaceans have developed a form of ritualized combat that lets individuals compete without bludgeoning each other to death.

When you're one of nature's greatest pound-for-pound punchers, getting into a dispute over territory or mates can quickly turn ugly.

Mantis shrimp are notorious for their clublike front limbs, which they use to kill prey. These fearsome appendages are capable of the world's fastest limb movement and have even been known to break through aquarium glass with a single strike.

To avoid turning these formidable weapons against their own species, the crustaceans have developed a form of ritualized combat that lets individuals compete without bludgeoning each other to death, a new study suggests. [See video of mantis shrimps' ritualized sparring]

Researchers from Duke University in Durham, North Carolina, engineered fights over an artificial burrow between mantis shrimp of roughly the same size from the species Neogonodactylus bredini. These crustaceans coil their tail plates in front of their bodies and use them like shields to protect against blows during an altercation. Surprisingly, the scientists found that victorious mantis shrimps weren't necessarily the ones with the most powerful punch. Rather, in 30 out of 34 contests, it was the competitor that landed the most strikes that won the fight.

"The acceleration of their strike is on the same order of magnitude as a bullet in the muzzle of a gun," said Patrick Green, a Ph.D. student at Duke University and lead author of the new study. "They can dismember crabs and crack open snail shells, so it can cause dramatic damage."

The researchers said these ritualized brawls may be a way for mantis shrimp to communicate information or resolve scuffles without inflicting injury. 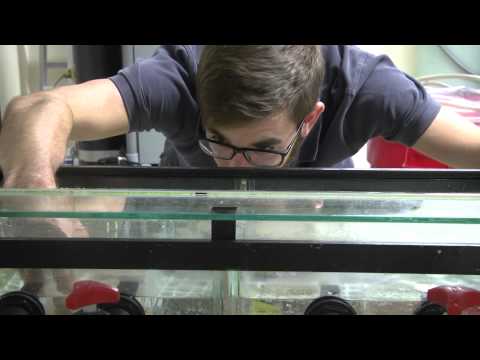 "They may not be able to easily gauge who is the more motivated or potentially the better fighter in a contest, so they might escalate to this ritualized exchange of strikes to get information about their opponents' aggressive motivation or endurance or some other aspect of their physiology," Green told Live Science.

Animal behavior research suggests competitors generally resolve conflicts using signals before escalating to dangerous combat. As such, the researchers said they expected to find that displays of the shrimps' fighting appendages, known as meral spreads, would decide most contests; and the shrimp with the hardest punch - determined by measuring their peak strike force - would win any skirmishes that escalated to full-blown combat.

Instead, the researchers found that even though competitors performed meral spreads in roughly half the contests, the animals still escalated to striking in 33 of the 34 experiments. And there was no correlation between a shrimp's peak strike force and whether it eventually won a contest.

"Initially, it really was confusing, and it kind of freaked me out," Green said. "It's an easy thing in science to be confused if you don't match your hypothesis, but if you explore further and are open to the possibilities, it can lead to really exciting results."

A close look at the complex eyes of a colorful mantis shrimp. | Michael Bok

The crustacean's tendency to coil its tail plate, or telson, and trade blows had been observed in several species before. But Green said little work had been done on how that behavior helps decide a winner when two mantis shrimp go head to head. [Image Gallery: Magnificent Mantis Shrimp]

"What we did that was novel was to look at how that behavior is used in the resolution of contests," Green said. "And describing it as 'telson sparring' in the paper relates to what we think is its use as an escalated method of assessment."

In the study, the researchers describe how the behavior could hold parallels to sparring in large mammals, such as elephants and deer. Those animals sometimes employ nonlethal use of weapons like antlers or tusks to assess a competitor.

While the researchers' current hypothesis is that the contests demonstrate which shrimp is the most aggressive or motivated fighter, Green said he hopes to investigate measures of strike performance other than peak force. This will help researchers see if different factors influence the outcome of contests, he said.

"The animal that bites harder or grabs harder is often the one that wins," Green said. "But we want to look a little more deeply into other metrics of performance and really get a bit more into the biomechanics of this exchange."

Mantis shrimp expert Roy Caldwell, a professor of integrative biology at the University of California, Berkeley, welcomed the study. "Most work in this area has been on tetrapods and it is nice to see parallels showing up in invertebrates that possess lethal weapons," he told Live Science.

But in the experiments, the lack of an advantage for the shrimp already occupying a burrow suggests their design was not that attractive to the shrimp or didn't provide them decent protection, he said, adding that his own experiments with size-matched individuals showed that burrow residents were more likely to win contests.

These Fish Were Made For Walking: Photos

Caldwell also noted that most "telson sparring" contests are between shrimp unequally matched due to size, injury or stage in their molt cycle, and his studies have shown that any weakness in a shrimp's strike is quickly discovered and capitalized on.

Caldwell agrees that in contests over burrows, persistence appears to signal an intruder's motivation, and despite their advantage, the burrow residents will often flee under sustained attack. But, he believes telson sparring is likely just one of several aggressive tactics employed by mantis shrimp.

The detailed findings of the new study were published yesterday (Sept. 22) in the journal Biology Letters.

Marine Marvels: Spectacular Photos of Sea Creatures The 12 Weirdest Animal Discoveries Dangers in the Deep: 10 Scariest Sea Creatures Copyright 2015 LiveScience, a Purch company. All rights reserved. This material may not be published, broadcast, rewritten or redistributed.

A close look at the complex eyes of a colorful mantis shrimp.