Between 1:34 am and 4:04 am EDT on Tuesday, SpaceX plans to execute its latest rocket launch from the Kennedy Space Center in Florida, sending a communications satellite into orbit roughly 22,000 miles above Earth. It will be the company's second rocket launch in three weeks - an aggressive flight rate that it needs to maintain to fulfill its promise of low-cost, reliable transportation to space.

SpaceX founder Elon Musk has taken a Silicon Valley approach to building and flying rockets, improving design and operations as the company juggles a manifest of more than 70 missions for NASA and commercial customers that is worth more than $10 billion.

Three versions of the aerospace company's Falcon 9 rocket have flown since its debut in June 2010, including the current model, known as Falcon Full Thrust, which typically has the range to fly back to a landing pad so that its boosters can be reused - an approach also favored by Amazon founder Jeff Bezos's rocket company, Blue Origin. But due to the heavy payload and high-altitude orbit no attempt will be made to recover the booster flying on Tuesday. 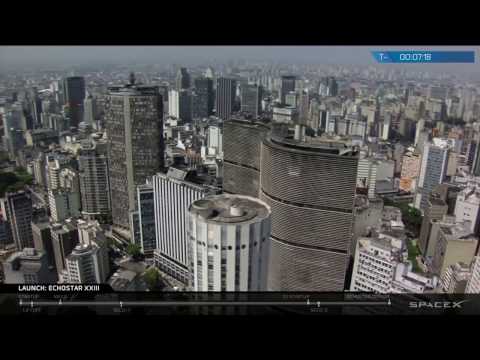 SpaceX is working on the final version of the rocket, known as Block 5, and hopes to fly it before the end of the year, according to SpaceX president Gwynne Shotwell.

Blue Origin has taken a different approach. Bankrolled by Bezos, who is currently ranked by Forbes magazine as the fifth-richest person in the world, Blue Origin is intent on refining its design and perfecting landing technology before beginning commercial launch services. The company has opted to develop a reusable suborbital launch system, called New Shepard, for passengers and payloads before attempting orbital spaceflight and landing bigger rockets. Last week, the company unveiled a fully assembled version of its newly developed rocket engine, the BE-4, which will be used in its New Glenn rocket.

"New Shepard... is so important for us because that's a mission that we can fly many, many times a year, and we will get so much practice," Bezos said at the Satellite 2017 conference last week "If you want to recover a booster, a big booster, an orbital booster, there are a few options. You can put wings on it, kind of like the space shuttle. You can use parachutes... and you can use vertical landing," Bezos added. "The reason why I like vertical landing is because it's so scalable.... If you balance a broom on your hand, you can do that. If you try to balance a pencil on your hand, it's very difficult. So as the vehicle gets bigger, that inverted pendulum problem actually get a little easier to solve."

Blue Origin's incremental approach to commercial space flight has won the company some early fans. During his talk on March 7, Bezos announced that satellite operator Eutelsat had signed the first contract for a New Glenn rocket ride, to take place sometime around 2021. A day later, Blue Origin and internet-via-satellite startup OneWeb jointly announced an agreement for five New Glenn flights around the same timeframe.

This year, United Launch Alliance - a joint venture of Boeing and Lockheed Martin, the two biggest companies in the US aerospace industry - will decide whether to buy Blue Origin's methane-fueled BE-4 engines for its new Vulcan rockets or switch to a backup offering by industry stalwart Aerojet Rocketdyne.

SpaceX and Blue Origin are taking different approaches to deep space exploration as well. Musk, who has made no secret of his ambition to send landers and eventually people to Mars, announced two weeks ago that SpaceX had signed a contract to fly two tourists around the moon in late 2018.

RELATED: SpaceX Must Still Prove That It Can Safely Launch Astronauts Into Space

He didn't say how much the flight would cost, but likened it to "a little bit more than the cost of a crewed mission to the space station."

"I think there's a market for one or two of these per year," Musk remarked. "The goal for SpaceX from its founding in 2002 has been to accelerate the advent of space exploration, ultimately with the idea of a self-sustaining civilization on Mars and making humanity multi-planetary.... A critical step along the way is getting to understand what it's like to have people in deep space."

Another potential customer for SpaceX is NASA, which is considering adding a crew to the lunar flyby test flight of its new heavy lift Space Launch System rocket and Orion deep space capsule. The debut launch, originally targeted for late 2018, is likely to slip into 2019, which is potentially enough time to add the equipment and procedures for accommodating two astronauts. A feasibility study is underway. The SpaceX mission could be an alternative.

Bezos also sees a potential partnership with NASA for lunar exploration and commercial development. Blue Origin is pitching a proposal to NASA and President Donald Trump's transition team to fly cargo to a potential lunar base at the moon's south pole.

For now, SpaceX's main focus is on building up its Falcon flight rate to maintain an edge on the competition. The fleet has been grounded twice in two years following accidents, delaying launches of customers' revenue-producing satellites for months.

SpaceX returned to flight in January from its last accident. The company hopes to fly about 20 more Falcon flights from Florida and from the Vandenberg Air Force Base in California before the end of the year.