The launch took place this afternoon.

Update: The first stage of the launch was a success. The Falcon 9 landed safely back on SpaceX's barge in the ocean. Watch it stick the landing in this video:

Later this afternoon, SpaceX is set to launch another rocket that will carry supplies and experiments to the International Space Station. According to Space.com, it will be the private company's eighth such re-supply mission, as part of its contracted relationship with NASA. The Falcon 9 rocket lifting off today will deliver new materials for growing vegetables in space, fungi for developing new medicines, and live mice. The rocket will also carry a new expandable habitat that NASA is hoping can be used for long-term space travel (e.g. Mars).

Watch the live-stream of the launch from Cape Canaveral, Florida here. If it is delayed, SpaceX will move the mission to April 9 at 4:20pm Eastern. 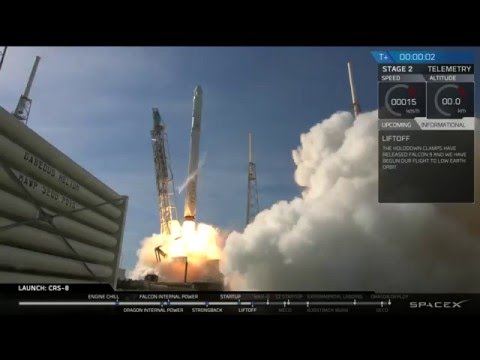