"I will tell you, some of the classified briefings would take your breath away at the potential threats we face," the Texas senator remarked at an event this week.

"The development that other countries are making in space weaponry, to take out our communication equipment, is truly chilling," Cruz said during a discussion Tuesday (May 16) at "On the Launchpad: Return to Deep Space," a webcast event in Washington, D.C. organized by The Atlantic magazine.

"I will tell you, some of the classified briefings would take your breath away at the potential threats we face," added Cruz, who serves on the Senate's Armed Services Committee and chairs the Science, Commerce and Transportation Committee's Subcommittee on Space, Science and Competitiveness. [The Most Dangerous Space Weapons Ever]

The United States' national security and economy depend heavily on the country's many advanced satellites, Cruz said, from military reconnaissance and communications spacecraft to the commercial birds that enable ATM withdrawals and credit-card purchases.

"With our satellite infrastructure being vulnerable, the basic steps of commerce and life are threatened profoundly, and I think we need serious investment to address that vulnerability," Cruz told Ross Andersen, a senior editor at The Atlantic, during yesterday's discussion.

The comments by Cruz — who didn't elaborate on the type or extent of the investment required — mirror those made recently by several high-ranking American military officials, who have stressed that the nation needs to prepare for a war that extends into space. 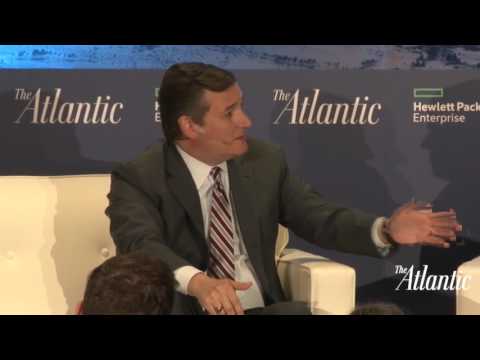 For example, in March, Navy Vice Adm. Charles A. Richard, deputy commander of U.S. Strategic Command, said the U.S. should "maintain a space posture" that communicates the same message to potential adversaries that a strong nuclear arsenal does: There's just no benefit to an attack.

"I submit [that] the best way to prevent war is to be prepared for war, and we're going to make sure that everyone knows we're going to be prepared to fight and win wars in all domains, to include space," Richard said on March 22 during a presentation at a Center for Strategic and International Studies conference in Washington, D.C.

Richard cited reports that both Russia and China are developing a variety of anti-satellite technologies. Cruz singled out those two nations for such work as well, in response to a question from Andersen about how to avoid an arms race in space.

"That is a very real concern, but we also have to acknowledge the realities, which is that other countries — including China, including Russia — are making significant investments in those regards," Cruz said. "And so I think sticking our heads in the sand and saying, 'We don't want an arms race, so we're just going to ignore the threats' — that's not a prudent step."

You can watch Cruz' discussion with Andersen in its entirety at the AtlanticLIVE YouTube channel.