Audio recordings from the spacecraft reveal a surprising lack of dust between Saturn and its rings, as Cassini continues taking breathtaking photos of the distant planet.

When a spacecraft goes where none have gone before, a few surprises turn up. As the Cassini spacecraft prepared to make its second loop through the narrow gap between Saturn and its rings today, scientists released more information about its first-ever pass through that uncharted region last week. Cassini researchers had expected that the spacecraft would encounter some diffuse dust, but the data shows the gap to be surprisingly dust-free.

"The region between the rings and Saturn is 'the big empty,' apparently," said Cassini Project Manager Earl Maize from NASA’s Jet Propulsion Laboratory in a statement. "Cassini will stay the course, while the scientists work on the mystery of why the dust level is much lower than expected."

While the lack of dust particles is puzzling, scientists are nevertheless quite excited, because this means the spacecraft has a better chance of surviving the remaining 21 passes before the end of the mission in September of this year. Cassini is running out of fuel, and will be intentionally crashed into Saturn so that it doesn’t accidently contaminate a potentially habitable moon such as Enceladus or Titan.

During these dives, Cassini will gather as much scientific data as possible while the spacecraft is close to Saturn. The gap between the rings and the top of Saturn’s atmosphere is about 1,500 miles (2,000 kilometers) wide. During the dive, Cassini came within about 1,000 miles (1,600 kilometers) of Saturn’s cloud tops.

The images taken by Cassini during the close passes have been nothing short of spectacular. NASA has released a large gallery of the spacecraft’s recent raw images, and we’ve included some stunning images processed by Kevin Gill, a science data software engineer at the Jet Propulsion Laboratory.

The best models for the region suggested that if there were ring particles in the area where Cassini crossed the ring plane, they would be tiny — on the scale of smoke particles. But the spacecraft was traveling at speeds of about 77,000 mph (124,000 kph) relative to Saturn, so small particles hitting an instrument or another sensitive area could potentially have disabled the spacecraft.

Therefore, as a protective measure, the spacecraft used its large, dish-shaped high-gain antenna (13 feet, or 4 meters, across) as a deflector shield, orienting it in the direction of oncoming ring particles.

Two instruments were able to collect data, peeking out from behind the dish. One was the Radio and Plasma Wave Science (RPWS) instrument. While this instrument normally detects plasma waves, it can also be used to “listen” for dust particles hitting the instrument's antennas. The particle strikes are converted to an audio format that sounds like pops and cracks, covering up the usual whistles and squeaks of waves in the charged particle environment that the instrument is designed to detect.

The RPWS team expected to hear a lot of pops and cracks on crossing the ring plane inside the gap, but instead, the whistles and squeaks came through surprisingly clearly on April 26. The video below shows what it heard. 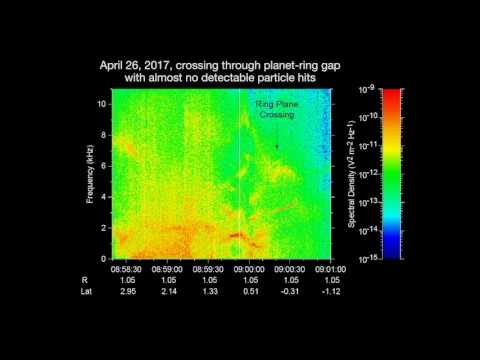 The audio reveals virtually no extra noise from dust particles striking the spacecraft. Compare it to previous data when Cassini went through a faint, dusty ring crossed the plane of Saturn's rings on Dec. 18, 2016. In this data there is a clearly audible and visible rise, peak, and fall in the number of pops and cracks that represent ring particles striking the spacecraft, sounding like a noisy vinyl record. 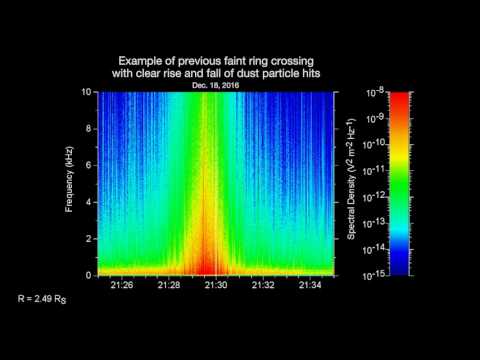 "It was a bit disorienting — we weren't hearing what we expected to hear," said William Kurth, RPWS team lead at the University of Iowa, in a statement. "I've listened to our data from the first dive several times and I can probably count on my hands the number of dust particle impacts I hear."

The team's analysis suggests Cassini only encountered a few particles as it crossed the gap — none larger than those in smoke (about 1 micron across).

As Cassini makes its second ring dive today, it is out of contact with Earth. It is expected to reestablish communication on May 3 and send back more data and amazing images from its latest close encounter with Saturn.

WATCH: NASA Just Revealed There Could Be Life on Saturn's Moon Enceladus