Speaking in Washington, DC, the SpaceX founder and CEO also said he would soon provide an update on the company’s reusable rocket-spaceship, the Interplanetary Transport System.

Elon Musk may be focused primarily on Mars, but he'd also like to see a human outpost on a world much closer to home.

"To really get the public real fired up, I think we've got to have a base on the moon," the billionaire founder and CEO of SpaceX said today (July 19) at the 2017 International Space Station Research and Development (ISSR&D) conference in Washington, DC.

"Having some permanent presence on another heavenly body, which would be the kind of moon base, and then getting people to Mars and beyond — that's the continuance of the dream of Apollo that I think people are really looking for," Musk told NASA ISS program manager Kirk Shireman, who interviewed him onstage at the conference. [Moon Base Visions: How to Build a Lunar Colony (Photos)]

Musk and SpaceX are working to make the latter part of that vision a reality within the next 50 years or so. Last September, at the International Astronautical Congress (IAC) meeting in Mexico, the entrepreneur unveiled plans for a reusable rocket-spaceship combo called the Interplanetary Transport System. The ITS would help colonize Mars and, potentially, allow humanity to explore more distant worlds, such as the Jupiter moon Europa and the Saturn satellite Enceladus. 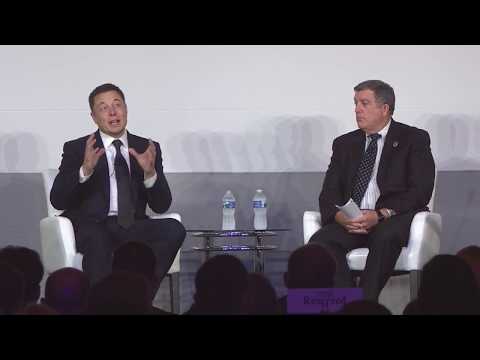 Musk has been relatively quiet about the ITS since then, but he said he plans to give an update about the architecture at the next IAC conference, which will be held this September in Adelaide, Australia. And he teased an ITS tweak that SpaceX has been working on.

Downsizing the ITS spaceship a bit — the originally unveiled version would carry at least 100 people — and using it for some profit-generating "Earth-orbit activity" could help make Mars colonization economically feasible, Musk said at the ISSR&D conference today.

"That's one of the key elements in the new architecture," Musk said. "It's similar to what was [unveiled] at IAC, but it's a little bit smaller — still big. I think this one's got a shot at being real on the economic front. You know, that's the trick."

Musk also said today that another one of his ventures, The Boring Company, could aid in Mars colonization as well. The Boring Company's main goal is to construct tunnel networks beneath (and, eventually, between) traffic-choked cities such as Los Angeles, enabling speedier travel.

But advanced tunneling technology will also be in high demand on Mars, Musk said, citing the likely need to mine large amounts of ice and other natural resources. And Red Planet colonists may want to live underground, at least part of the time, to shield themselves from the relatively high radiation fluxes encountered on the Martian surface, he added.

"You can build a tremendous amount underground with the right boring technology on Mars, so I do think there's some overlap in that technology-development arena," Musk said.

But Earth-optimized tunneling machines won't do the job on Mars, he stressed.

"The Earth ones are really heavy. Like, really heavy," Musk said. "You're not worried about weight for an Earth tunneling machine; actually, you want one that's nice and heavy. But a Mars one, you'd have to redesign it to be superlight — that's a tricky one — and then just take into account the different conditions on Mars and everything else."

Editor's Recommendations
Why Go Back To The Moon? Retracing The Last Footsteps | Video
SpaceX's Interplanetary Transport System for Mars Colonization in Images
How Living on Mars Could Challenge Colonists (Infographic)