The Pentagon's Defense Advanced Research Projects Agency (DARPA) announced that it had selected Boeing for the next phase of its XS-1 project.

The US military's new XS-1 space plane will be built by Boeing, and it's called the Phantom Express.

The Defense Advanced Research Projects Agency (DARPA) announced on May 24 that it had selected Boeing for the next phase of its XS-1 project, known as the Experimental Spaceplane, after an intense competition among aerospace companies. The XS-1 is aimed to be a completely reusable military space plane capable of launching 3,000-lb. (1,360 kilograms) satellites into orbit 10 times in 10 days. The spacecraft could dramatically reduce the cost of launches to $5 million per flight, DARPA officials said.

"The XS-1 would be neither a traditional airplane nor a conventional launch vehicle but rather a combination of the two, with the goal of lowering launch costs by a factor of ten and replacing today's frustratingly long wait time with launch on demand," DARPA program manager Jess Sponable said in a statement. "We're very pleased with Boeing's progress on the XS-1 through Phase 1 of the program and look forward to continuing our close collaboration in this newly funded progression to Phases 2 and 3 — fabrication and flight." [DARPA's Experimental XS-1 Space Plane in Pictures]

Phase 2 of the XS-1 program will have Boeing design, build and test a technology demonstration vehicle by 2019, according to the DARPA statement. A ground-based engine test will be included, to show the feasibility of firing the engine 10 times in 10 days, DARPA officials said. 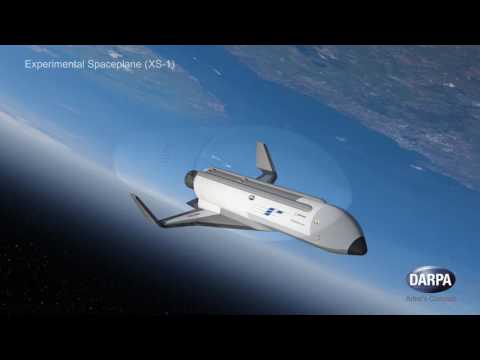 "After multiple shakedown flights to reduce risk, the XS-1 would aim to fly 10 times over 10 consecutive days, at first without payloads and at speeds as fast as Mach 5," DARPA officials wrote in a statement. "Subsequent flights are planned to fly as fast as Mach 10, and deliver a demonstration payload between 900 pounds and 3,000 pounds [400 to 1,360 kg] into low Earth orbit." (Mach 5 means five times the speed of sound, which equates to 3,806 mph, and Mach 10, or 10 times the speed of sound, is 7,612 mph.)

Boeing's Phantom Express XS-1 design beat out concepts by two other teams: a partnership of Masten Space Systems and XCOR Aerospace, and the team of Northrop Grumman and Virgin Galactic.

The Phantom Express XS-1 is designed to launch to the edge of space, and deploy a piggyback-mounted second stage that would carry a satellite the rest of the way into orbit. The space plane would then return to Earth to make a runway landing.

The XS-1 will launch vertically using an Aerojet Rocketdyne AR-22 engine fueled with liquid oxygen and liquid hydrogen. The AR-22 engine is a version of main engines that were used to power NASA's space shuttles, Boeing representatives said in a statement.

The Phantom Express will be built by Boeing's Phantom Works division, which also built the two robotic X-37B space planes that are currently in use by the US Air Force for classified missions. The reusable X-37B space planes have flown four missions to date, each longer than the last, with the latest mission (called OTV-4) landing at NASA's Kennedy Space Center in Cape Canaveral, Florida, on May 7 after 718 days in orbit.

"Phantom Express is designed to disrupt and transform the satellite launch process as we know it today, creating a new, on-demand space-launch capability that can be achieved more affordably and with less risk," Darryl Davis, president of Boeing Phantom Works, said in a separate statement.

DARPA officials said the rapid-turnaround goal of the XS-1 space plane and the technologies that make it possible won't benefit just the US military. DARPA will publicly release some of its results from the Phase 2 and 3 trials, and share payload specifications for interested commercial companies, agency officials said.

"We're delighted to see this truly futuristic capability coming closer to reality," Brad Tousley, director of DARPA's Tactical Technology Office, which oversees the XS-1 project, said in the DARPA statement. "Demonstration of aircraft-like, on-demand and routine access to space is important for meeting critical Defense Department needs and could help open the door to a range of next-generation commercial opportunities."