Astronomers looking at how intergalactic gas and dust moves across great distances found that up to half of the matter surrounding us comes from galaxies far, far away.

Astrophysicists who were analyzing galaxy formation recently looked at how intergalactic gas and dust is transported over time and across great distances. They found that up to half of the matter in our Milky Way galaxy likely comes from other galaxies far, far away.

“Given how much of the matter out of which we formed may have come from other galaxies, we could consider ourselves space travelers or extragalactic immigrants,” Daniel Anglés-Alcázar, an astrophysics postdoctoral fellow from Northwestern University who led the study, said in a statement. “It is likely that much of the Milky Way’s matter was in other galaxies before it was kicked out by a powerful wind, traveled across intergalactic space and eventually found its new home in the Milky Way.”

This is a “first-of-its-kind analysis,” the team said, with the findings opening a new line of research into understanding galaxy formation. The study appears in the Monthly Notices of the Royal Astronomical Society.

Anglés-Alcázar and his fellow researchers used a supercomputer simulation based on the FIRE (Feedback in Realistic Environments) project, which is co-led by Northwestern physics and astronomy professor Claude-André Faucher-Giguère. FIRE uses numerical simulations that can produce realistic 3D models of galaxies. Anglés-Alcázar developed state-of-the-art algorithms to follow how a galaxy forms over time, from just after the Big Bang to the present day. 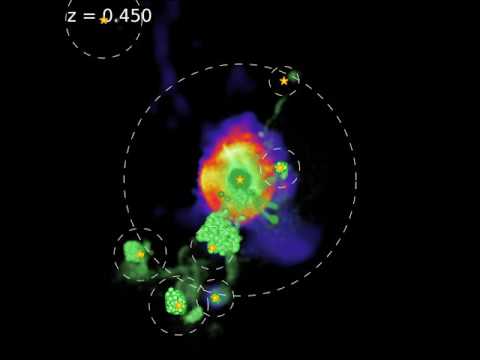 Using the equivalent of several million hours of continuous computing time, the team was able to quantify how galaxies acquire matter from the universe over time. They did this by “tracing cosmic inflows, galactic outflows, gas recycling, and merger histories,” according to their paper.

The findings on galactic evolution were unexpected, and the researchers coined a new term to explain the phenomenon: intergalactic transfer.

RELATED: Cosmic Blast of X-rays Inexplicably Outshines All of a Galaxy's Stars

The simulations showed that supernova explosions within galaxies eject enormous amounts of gas, which causes atoms to be transported from one galaxy to another via powerful galactic winds. Even though galaxies are far apart from each other, the galactic winds propagate material at several hundred kilometers per second, and over several billion years this process infused new material into galaxies, sparking star formation.

“We show that in situ star formation fueled by fresh accretion dominates the early growth of galaxies of all masses, while the re-accretion of gas previously ejected in galactic winds often dominates the gas supply for a large portion of every galaxy’s evolution,” the team wrote. “Externally processed material contributes increasingly to the growth of central galaxies at lower redshifts.”

By tracking in detail the complex flows of matter in the simulations, the research team found that gas flows from smaller galaxies to larger galaxies, such as the Milky Way, where the gas forms stars. Additionally, even stars formed in one galaxy could be transferred to another. This transfer of mass through galactic winds can account for up to 50 percent of matter in the larger galaxies, the researchers said.

“In our simulations, we were able to trace the origins of stars in Milky Way-like galaxies and determine if the star formed from matter endemic to the galaxy itself or if it formed instead from gas previously contained in another galaxy,” said Anglés-Alcázar.

The accepted theory of galactic formation is that shortly after the Big Bang, the hydrogen, helium and other trace elements started to clump together due to small density fluctuations, perhaps from dark matter that that provided the initial gravitational attraction. Matter then bunched together into larger and larger collections, forming the first proto-galaxies.

Within these first galaxies, more clumps of material came together to eventually create the first stars. These stars lived short violent lives, ending in powerful supernovae that then seeded the next generations of stars. The first galaxies were gravitationally attracted to one other, and merged together into larger and larger structures, ultimately becoming the large spiral galaxies we know today.

But the intergalactic transfer of gas from other galaxies is “an important but previously under-appreciated growth mode,” the researchers said, emphasizing that their study showed that galactic winds are a “primary contributor to the baryonic mass budget of central galaxies.”

“This study transforms our understanding of how galaxies formed from the Big Bang,” Faucher-Giguère remarked in a statement. “What this new mode implies is that up to one-half of the atoms around us — including in the solar system, on Earth and in each one of us — comes not from our own galaxy but from other galaxies, up to one million light-years away.”

“Our origins are much less local than we previously thought,” he added. “This study gives us a sense of how things around us are connected to distant objects in the sky.”

WATCH: What Happens When Galaxies Die?