Astronomers have identified a weird pair of orbiting asteroids, called 288P, as the first known binary asteroid also classified as a comet.

Astronomers recently spotted two space rocks behaving strangely. As the asteroids orbited each other, both of them appeared to be shedding material just like a comet does — observations revealed a coma around the objects as well as a long tail of material.

The group have identified this weird system, called 288P, as “the first known binary asteroid also classified as a comet.” There are a few select examples of single asteroids shedding water and dust and leaving behind a comet-like tail, but it’s the first time two of these objects were seen orbiting each other.

288P was first discovered in November 2006 by the astronomical survey Spacewatch. At the time, it was thought to be an asteroid and called Asteroid 300163 (2006VW139). In 2011, the Pan-STARRS telescope spotted cometary activity and the object was renamed 288P.

Astronomers didn’t know that 288P was two objects until the Hubble Space Telescope observed it in September 2016, though the team suggested it could be two objects in November 2015.

From the objects’ orbit, astronomers could see that 288P originally came from the asteroid belt. Astronomers expect that in the asteroid belt, water ice can only exist for billions of years if it is protected by a covering of dust, perhaps a few meters thick. But 288P sheds water ice as it approaches the sun, indicating that the dust layer is eroded or lost. 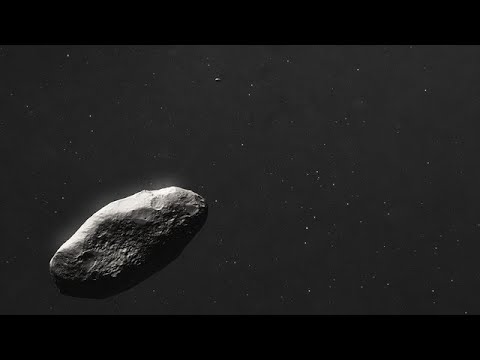 “We detected strong indications of the sublimation of water ice due to the increased solar heating — similar to how the tail of a comet is created,” said Jessica Agarwal, lead author and a scientist at the Max Planck Institute for Solar System Research in Germany, in a statement.

“The most probable formation scenario of 288P is a breakup due to fast rotation,” she added, noting that the team estimates that the breakup happened only 5,000 years ago. “After that, the two fragments may have been moved further apart by sublimation torques.” 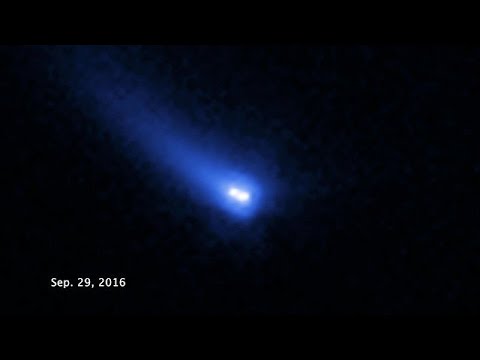 This time-lapse video, assembled from a set of ESA/NASA Hubble Space Telescope images, reveals two asteroids with comet-like features orbiting each other. The asteroid pair, called 288P, was observed in September 2016, just before the asteroid made its closest approach to the sun.

The new observations of 288P came shortly before the asteroid pair made its closest approach to the sun. Astronomers looked at 288P with the Hubble and saw two objects, separated by about 100 kilometers (60 miles) and orbiting each other. The asteroids are almost the same mass and size.

“Understanding the origin and evolution of main-belt comets — asteroids orbiting between Mars and Jupiter that show comet-like activity — is a crucial element in our understanding of the formation and evolution of the whole solar system,” says the European Space Agency’s Hubble Space Telescope page. “Among the questions main-belt comets can help to answer is how water came to Earth. Since only a few objects of this type are known, 288P presents itself as an extremely important system for future studies.”

Agarwal added that finding 288P was serendipitous, so it may be the only known object of its type for quite some time — making observations of it all the more important.