During the mission, four men and two women lived apart from the rest of planet Earth and could eat only shelf-stable foods and some lab-grown vegetables.

After spending eight months simulating life on Mars on the slopes of the Mauna Loa volcano, six "astronauts" emerged from their Hawaiian habitat on Sunday (Sept. 17) to return to civilization.

This concluded the fifth mock Mars mission of the NASA-funded HI-SEAS program (Hawaii Space Exploration Analog and Simulation). Operated by the University of Hawaii, this research project studies how groups of interplanetary travelers would work together on long-term missions while in cramped quarters.

During the mission, four men and two women lived in isolation from the rest of planet Earth and could eat only shelf-stable foods and occasional lab-grown vegetables. When communicating with the outside world, they had to deal with the 20-minute delay that astronauts on Mars would experience as well. And any time they went outside, they had to put on their spacesuits. [In Photos: 8 Months on 'Mars' with the HI-SEAS Mission V Crew]

The Mission V crew entered the HI-SEAS dome on Jan. 19. During their eight-month stay on Mauna Loa, the world's largest active volcano, they conducted scientific experiments, performed daily exercises and maintained equipment in and around the dome. Outside the dome, the astronauts did geological fieldwork in their spacesuits just as if they were on Mars.

While HI-SEAS studies the more technical and practical aspects of living on Mars, a large part of the investigation is to see how a group of people live together in isolation with little to no privacy. [On Months-Long Missions, How Durable Is An Astronaut's Mind?] 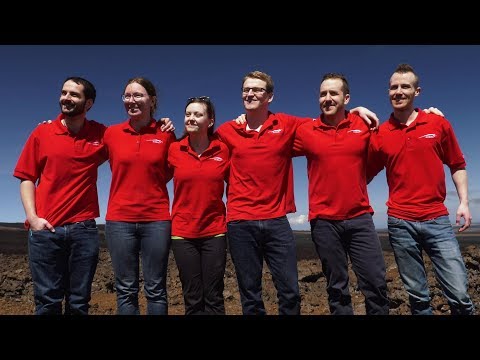 "Long-term space travel is absolutely possible," Laura Lark, IT specialist for HI-SEAS V, said in a video. "There are certainly technical challenges to be overcome. There are certainly human factors to be figured out, that’s part of what HI-SEAS is for. But I think that overcoming those challenges is just a matter of effort. We are absolutely capable of it."

After the crew emerged from the HI-SEAS dome at 9 a.m. EDT (1300 GMT), they " felt the sun and wind on their faces and ate fresh tropical papaya, pineapple and bananas with friends and family," University of Hawaii officials said in a statement.

"My advice to mission six is say, 'Yes.’" HI-SEAS V health and performance officer Brian Ramos said in the video. "If you have an opportunity whether it’s filming or learning a new science skill or flying the drone, going out to a lava tube, whatever it is, say, "Yes.' Take leadership on things. Honestly, you can come out of here in eight months learning a ton of stuff." [We Visited Mock Mars: Here's What It's Like to Live There]

Ansley Barnard, the engineering officer for HI-SEAS V, also had some advice for future mock Mars missions. "Remember that the toilet systems are also a system and they’re a living system," she said in the video. "So stay in balance with those, let them talk to you, if they smell a certain way or act a certain way they’re trying to tell you something, so listen."

The next HI-SEAS mission, HI-SEAS VI, is scheduled to begin in 2018 and will also last eight months.