The Smithsonian has scanned the suit and designed a special, nearly 360-degree view case for visitors to admire it in time for the moon landing's 50th anniversary in 2019.

Thanks to a huge Kickstarter campaign that raised nearly $720,000 in 2015, the Smithsonian finished several spacesuit scans and designed a special, nearly 360-degree view case for visitors to admire the suit in July 2019, just in time for the moon landing's 50th anniversary.

The biggest threat to the suit’s integrity is not the abrasive lunar dust that complicated matters for the Apollo 11 crew — which is still stuck in the suit, but not causing any additional damage. The primary issue is the natural decaying of the suit’s materials, particularly synthetic rubber, which has a half-life of about 50 years — roughly the same amount of time since Armstrong put his bootprints on the moon.

“Keeping it in a cool but not a cold environment at a low humidity goes a long way in terms of preserving it,” said National Air and Space curator Cathy Lewis. The plan is to create a new display case that will replicate those conditions.

The museum is keeping mum on what needs to be fixed up — Lewis says there’s still a lot of thinking to do — but the curatorial staff has been doing several scans for documentation and to formulate a repair plan. This includes X-rays, lasers, even cross-sectional information using CT scanning. All of this work allows technicians to scrutinize the layers of the suit without taking it apart. 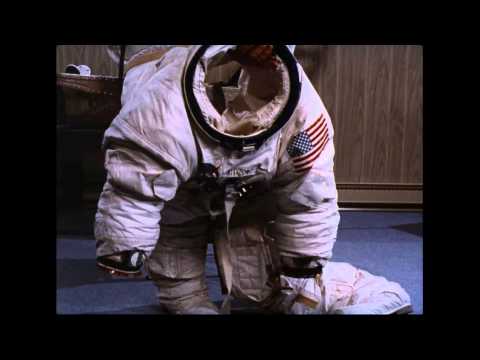 Enthusiastic helpers, Lewis said, include “people who have come out of the woodwork” that used to work on the spacesuit, particularly from the suit’s manufacturer, ILC Dover. In 1965, the company, which was then a part of the International Latex Corporation (known for making bras and girdles), won the prime contract for the Apollo space suit.

ILC Dover remains active in NASA’s spacesuit designs, particularly by servicing the existing space shuttle-era spacesuits that are used for spacewalks on the International Space Station. ILC Dover has also developed the prototype Z-2 spacesuit that could one day be worn by astronauts who visit Mars.

Lewis says the company generously pulled up aperture cards (a 1960s-era method of computer filing) and other files that contained change orders, images, and design drawings for Armstrong’s suit and the others that it manufactured. The Smithsonian now has those files and plans to eventually digitize them for public access.

“We’ve got amazing documentation of the suit’s construction — all the changes that were made after the initial construction,” Lewis said. “We have insight into how it was used, markings of anomalies that had been made preflight.... We’re mapping out the intimate history of not every molecule, but every thread and screw that has been through the suit.”

“This documentation,” she added, “will not only help in the Armstrong display, but we hope to apply what we’re learning now with our complete spacesuit collection as a whole.”

After a nearly 500,000-mile roundtrip to the moon, Apollo 11 splashed down safely in the Pacific on July 24, 1969, about 812 nautical miles southwest of Hawaii. The astronauts donned biological isolation garments because NASA and others were concerned about lunar viruses, which later proved to be a false worry.

The spacesuit remained in the command module spacecraft, which was first taken to Hawaii and then to the NASA Johnson Space Center in Houston, the lunar program’s hub. After contamination checks, the three astronaut spacesuits (including Armstrong’s) were then removed and checked for wear and tear, their ability to maintain pressure in a vacuum, and other engineering aspects.

RELATED: Hibernation for Deep Space Exploration Could Happen Sooner Than You Imagined

According to Lewis, this helped NASA improve spacesuit construction later in the Apollo moon program. By the last mission — Apollo 17 in 1972 — lunar spacesuits were rated as able to withstand three hard days of activity. By comparison, Armstrong’s spacesuit was only used on the moon for 2.5 hours.

Once NASA finished the engineering examinations of Armstrong’s spacesuit, it went on a 51-city tour between 1969 and 1970 of the capitals of the United States plus the District of Columbia. The spacesuits of Armstrong and his crewmates Buzz Aldrin and Michael Collins were inserted with mannequins and placed inside the Columbia spacecraft for visitors to see them up close.

NASA then offered Armstrong’s spacesuit to the Smithsonian in 1971, where it was on display until 2001. Lewis and her staff are now doing everything that they can to ensure that the suit remains on public view for as long as possible.

WATCH: How Do Spacesuits Keep Astronauts Safe From the Vacuum of Space?