NASA’s Global-scale Observations of the Limb and Disk (GOLD) launched yesterday, and researchers hope it will help them better understand how space and the Earth's upper atmosphere interact. The goal is to better protect satellites and astronauts aboard the International Space Station.

The pretty auroras that sometimes dance across northern skies are also an indication of intense space activity. The lights you see are actually charged particles from our sun interacting with the magnetic fields surrounding our planet. During periods of intense activity, the sun’s charged particles can disrupt satellite communications.

Events from below can also affect the atmosphere, like hurricanes or tsunamis. These weather events can change wind patterns in the upper atmosphere, causing dramatic shifts that are still poorly understood.

Scientists plan to use GOLD to better map the thermosphere — the atmospheric zone where Earth's weather and the weather in space meet. It will be the first time that scientists can watch the two systems interact with each other with high-resolution imagery. Greater insights into the workings of the thermosphere will help improve forecasts and help keep astronauts and satellites safe from solar flares. 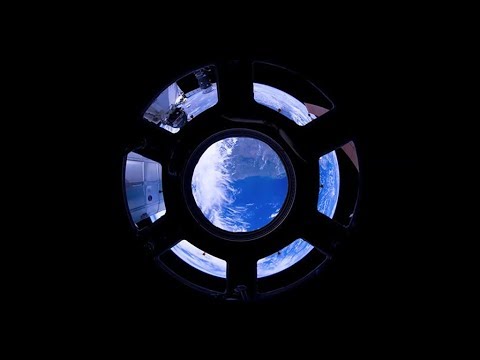 The $66 million GOLD is about the size of a mini-fridge and is designed to measure far ultraviolet light. It will examine the Earth from above the Western Hemisphere and generate full-disk maps of atmospheric patterns.

"Just like an infrared camera allows you to see how temperatures change with different colors, GOLD images ultraviolet light to provide a map of the Earth that reveals how temperature and atmospheric composition change by location," Richard Eastes, GOLD principal investigator at the Laboratory for Atmospheric and Space Physics at the University of Colorado, Boulder, said in a statement.

"For years, we've studied Earth's upper atmosphere in detail from the ground and low-Earth orbit," Eastes added. "By backing out to geostationary [high-Earth orbit], we can put things in a global context. You can see half the Earth from out there."

RELATED: Microexplosions on the Sun's Surface Are Superheating the Solar Corona

From GOLD images taken at 22,000 miles (34,500 kilometers) above Earth, scientists plan to look at parameters such as temperature and the relative amounts of particles such as atomic oxygen and molecular nitrogen. Over time, GOLD will help scientists understand how these gases can change conditions in the atmosphere.

NASA already has a fleet of sun-observing spacecraft, such as the Solar Dynamics Observatory and the Solar and Heliospheric Observatory — and more are on the way. The Parker Solar Probe will launch later this year and observe the sun's upper atmosphere, called the corona. The Ionospheric Connection Explorer will also focus on the Earth's upper atmosphere, but it will fly much closer to Earth — 350 miles — than GOLD.

WATCH: How Scientists Study the Sun Without Looking at It