Astronauts Are Using Virtual Reality to Study Perception in Space

Vection is a VR experience that's helping scientists learn more about how astronauts estimate the size and motion of objects in space.

Just a few days after Canadian astronaut David Saint-Jacques launched to the International Space Station on Dec. 3, the first-time space flyer faced a considerable challenge: learning how his perception is altered by spaceflight.

Scientists know that astronauts in microgravity often feel like they’re moving if they see another object moving, even when they’re immobile, which is a phenomenon that makes depth perception more difficult. This would especially be a problem when capturing a cargo spacecraft using the robotic Canadarm2. While the track record for successful astronaut captures is pretty much flawless, scientists are working on minimizing any complications. After all, crews need cargo to keep functioning in space.

This is where Saint-Jacques’ experimental challenge came in. Saint-Jacques spent a half hour participating in Vection, a virtual reality experience that will help scientists learn more about how astronauts estimate the size and motion of objects in space. He donned a VR headset and took part in three experiments: estimating the size of an object, “moving” in the virtual world to where he thought the object was placed in a hallway, and determining how he perceives tilt and visual acceleration.

The results of the experiment could be used to enhance the safety of operations aboard the ISS, and also help future astronaut crews working on the moon or on Mars.

“By understanding errors in self-motion and distance perception, and how they may change during time in space, we may be able to inform tasks that involve either of these judgments,” explained principal investigator Laurence Harris, of Toronto’s York University, in an email to Seeker. 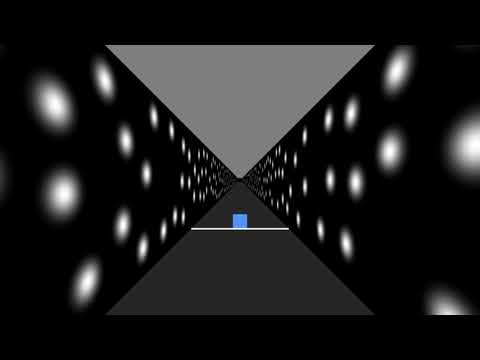 This is what astronauts will see when they perform one of three virtual reality tasks using the experimental&nbsp;Vection platform.

When using Vection, the astronauts are guided through three tasks via a head-mounted display. In the first, they are accelerated “sideways” along a virtual corridor, triggering a sense of motion even though in reality they remain still.

“We then assess whether any of that visual acceleration may be interpreted as acceleration due to gravity by asking them to indicate the new angle of the floor, which should appear tilted if they regard their previous direction of motion as ‘up’,” Harris said.

RELATED: Brain Changes in Space Could Be Linked to Vision Problems in Astronauts

In the second experiment, astronauts view a target in the same corridor. The target disappears as the astronauts virtually “move” along the corridor, and they press a button when they reach the position where they think that the target was situated.

“This tells us about how powerful visual motion is in space: how far visual motion makes you feel you have moved,” Harris explained.

The third experiment asks astronauts to compare the size of an object in the virtual corridor with a reference object they have in their hands. “The only way they can assess an object’s size is by knowing how far away it is and therefore this allows us to measure their perceived depth,” Harris added.

This work not only has implications for the ISS, but any future spaceflight activity – including NASA’s desire to establish the Lunar Orbital Platform-Gateway space station near the moon in the 2020s, and to move crews to Mars in the decades that follow. Knowing depth perception in space can help astronauts improve their ability to reach emergency hatches, dock a spacecraft, or control robotics platforms.

RELATED: NASA Is Trying to Keep These Five Things From Killing Astronauts

There are applications on Earth as well, such as better controlling moving vehicles or assisting people who have trouble with balance, such as the elderly.

“A major aim is to understand how our brains process self-motion cues in general,” Harris noted, “and to provide a quantitative model for how sensory information is combined together to do this.”

Each participating astronaut will be tested five times. Saint-Jacques has already gone through two tests – one on the ground, and another one in the days after his arrival on the ISS. His next three measurements will happen when he’s fully adapted to space (between days 80 and 100), when he’s adjusting to life back on Earth (four to six days after landing), and when he has made a full recovery from space (50 to 70 days after landing).

But we’ll have to be patient while awaiting results from the Vection experiment. There are only small crews on the ISS, and at least seven astronauts need to participate. A final report summarizing the data is expected to be published by 2023, just a year before the scheduled completion of the space station program.