Places that lacked an electrical grid and land-line telephones throughout the 20th century are powering their homes and businesses with the latest 21st-century technology.

In some of the most remote locations of the world, technology exists in a kind of twisting time warp.

In many remote towns and villages, bedrock technologies of the 20th century - like the electrical grid and land-line telephones - simply never arrived. But cutting-edge technologies, like solar panels and smart phones, are popping up with increasing regularity. And that's making Kenya an ideal setting for testing a variety of fast-moving entrepreneurial initiatives.

The British-Kenyan startup company SteamaCo, for example, has been combining solar energy with mobile technology to bring affordable electricity to rural communities bypassed by the 20th century.

The company specializes in working with local technicians to set up small, self-sustaining solar microgrids that harvest energy from Africa's abundantly sunny climate. By way of high-capacity solar panels and local power hubs, SteamaCo and its partners supply electricity to homes and businesses that lie too far away from municipal power grids.

In the absence of existing infrastructure and entrenched business interests, companies can deploy clean tech relatively cheaply and rapidly. It's an intriguing 21st-century inversion: Some Kenyan villagers can access clean energy options that aren't commercially available in many parts of the developed world.

RELATED: Peak Temperatures Will Push Electric Grid to the Brink in an Ever-Warming World

But a fundamental challenge remains: How does an energy provider collect payment in places where you can't hire meter readers or send bills?

That's where the mobile phones come in.

Kenya is one of the busiest mobile phone markets in the world, according to World Bank. Upwards of 95 percent of Kenyans are mobile phone users, while only 32 percent have regular access to a traditional power grid.

SteamaCo allows customers to prepay for their electricity by way of mobile banking platforms, like Paypal and M-Pesa. Kenyans are quickly adopting the process because it works like the prepaid mobile phone services with which they are already accustomed.

SteamaCo field manager Joseph Nyagilo says that residents in the small town of Entasopia are enthusiastically plugging into the solar microgrid.

"Since we came to this town, a number of businesses have come up," says Nyagilo. "The system is able to power welding, people are starting barber shops, video shows. We are now able to serve cold beers."

Kenya isn't the only country powering up with help from their mobil phones. SteamaCo says it operates 40 minigrids in seven African and Asian countries, and is expanding its mobile payment system to include access to irrigation pumps and biogas facilities. 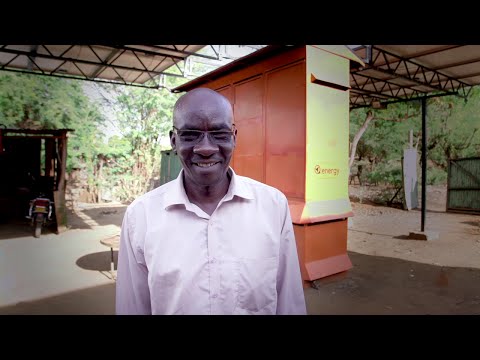