Smartwatch Turns Your Body into an Antenna

Just when we thought smartwatches couldn't get any smarter, a prototype is breaking new ground with the uncanny ability to recognize what its wearer is touching.

By exploiting the body's natural electrical conductivity, the watch is able to distinguish objects like an electric toothbrush, a kitchen stove, a doorknob or a motorcycle handlebar.

The new technology called EM-Sense was developed by Carnegie Mellon University and Disney Research. Researchers think that because the watch is able to recognize objects by using the distinctive electromagnetic noise emitted by each device, it reduces or even eliminates the need for sensors such as RFID tags inside devices.

Objects won't have to be modified to announce what they are to nearby computer devices, like a smartwatch. EM-Sense could also open the door to many context-aware apps.

Essentially, the technology extends the capability of the Internet to physical objects - a concept known as the Internet of Things - and opens up new ways for people to interact with objects.

"EM-Sense can make the Internet of Things experience even richer by enabling people to get information or additional functionality simply by touching everyday objects," said Jessica Hodgins, vice president of Disney Research, in an article published by Carnegie Mellon University.

With this groundbreaking technology, functions can range from setting a timer to know how much time an individual spends on certain activities, like brushing her teeth, to being able to unlock a computer without a password but simply by touching the keyboard.

Apple IWatch Could Be Solar Powered

Many other scenarios could also play out. For example, a user can step on a scale and have his weight displayed on his watch, touch his steering wheel and have the news play from his watch and then latch onto his office door and have calendar reminders sound off to alert him of his first morning meeting. If he needs help during a DIY home project, the user can reach for a drill and have an instructional diagram and tutorial presented on his watch.

The technology was unveiled at the ACM Symposium on User Interface Software and Technology this month in Charlotte, N.C.

You can see the technology unfold here. 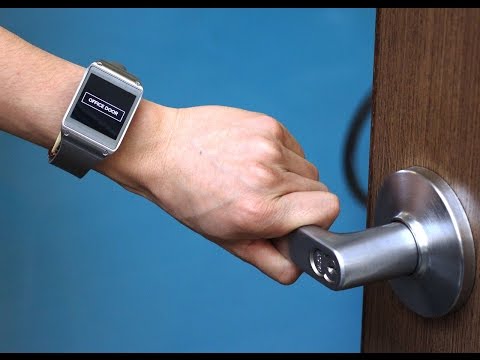 This week, our tech slideshow is all about the Mobile World Congress, the consumer electronics show that takes place in Barcelona each year. Innovative smartphones, wearable computers and Internet-connected cars are among some of the technologies that were on display. Here are some of our favorites.

The Mirama smart glasses, from

, have a gesture recognition system combined with augmented reality technology. The wearer uses her hands to interact with virtual objects seen in the glasses. Brilliant service wants their smart glasses to one day replace for smartphones.

For its unique aluminum unibody design, the HTC ONE was awarded this year's "Smartphone of the Year."

Walldorf, Germany-based SAP is working with the German national football team to prepare for the World Cup in 2014, and take soccer to the next level. The ball has embedded sensors and electronics that capture and analyze a wealth of data in real time, including spatial analysis of player movements.

Blackphone is the world's first smartphone that places security back into the hands of the user. The $629 phone, which comes unlocked, was developed in a partnership between Silent Circle and Geeksphone. Along with the PrivatOS, built on Android, the phone comes with a suite of Silent Circle apps, including Silent Phone, Silent Text and Silent Contacts; anonymous search, private browsing and VPN from Disconnect. SpiderOak provides a secure cloud file storage and the Blackphone ships with a remote-wipe and device recovery tool.

LG was on hand to promote its new G Flex, which has a 6.0” curved OLED screen, that while not flexible, does have a shape that fits well into the palm of a hand. The big screen provides an impressive panoramic view, while minimizing glare.

Samsung's Galaxy Fit was among many wearable fitness devices on display at the Mobile World Congress. The Fit has a thin, curved shape meant to follow the wrist; the user navigates menus by swiping horizontally. Along with a heart monitor, the Fit is designed to provide notifications for calls, e-mail and text message. A personal fitness coaching app is an option.

One of the most surprising announcements at the Mobile World Congress came from Mozilla, who plans to launch seven new devices using Firefox OS, including a smartphone -- the ZTE Open C -- priced at $25. The devices are being aimed at people in developing countries.

Chinese company Gionee presented its Elife 5.5, the world's thinnest smartphone. At 5.5 millimeters thick, the phone edges out the 5.75mm Vivo X3. For comparison, the iPhone 5s is 7.6mm thick.

The new Xperia Z2 phone and tablet from Sony are waterproof, come with brighter screens and noise-canceling earbuds.

Sony's SmartBand SWR10 is also waterproof, which makes sense if you plan to sweat while wearing them.

Practically speaking, cars are becoming gadgets. Ford was among several automakers displaying their versions of fully connected Internet cars. These cars work in conjunction with a person's smartphone or work like a smartphone to run apps that connect to the Internet, play music and movies, display GPS navigation and control security features at home, among many other features.