This smartphone-controlled bot might just be the perfect table tennis partner.

Get those paddles ready. Annoyed with the lack of ideal human table tennis partners, two brothers decided to create the perfect robotic one.

About a foot tall and 6 inches wide, the ball-spitting Trainerbot can be programmed from a smartphone to play at whatever level you want, in any catch net, and even reproduce an opponent's trick shots.

Alexander and Harrison Chen grew up playing ping pong, but went off to study far away from each other. Unable to train together, they got the idea to build a robot that could replicate their respective skills. They made the first version of Trainerbot in 2012 from a garbage can.

Subsequent versions got more sophisticated as they learned engineering, and last month they launched on Kickstarter. The Bluetooth-connected bot, which kind of resembles a periscope, shoots ping pong balls out of its canister. Trainerbot has sophisticated spin, trajectory, and direction control that's programmable from a smartphone. An optional stand allows it to be set up outside the table like a real player.

"Ever wonder how the athlete on TV missed that shot?" their Kickstarter page asks. "Program that famous match and try it for yourself."

Recently the team announced that Trainerbot will work with the International Table Tennis Federation's new 40 mm balls. They also added a "ball profiles" option to the app for different ball standards. Kickstarter backers pledging $329 will get the bot, power cord, and 30 balls. For an additional $100, backers get the robot stand and 60 balls. 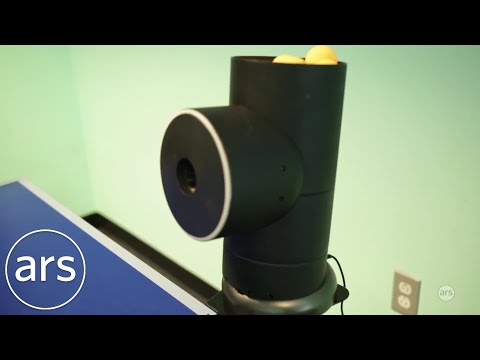 Demand is high. Despite having more than a month left on the campaign, Trainerbot is already more than fully funded. The team says they're planning to start production later this year and begin shipping units to backers in February 2017. Then it will be game on.