Concealed sensors register rhythmic movement, and no we're not making this up.

Ever get the feeling we're running out of good ideas for smart devices?

Following the dubious line of innovation that brought us smart bras and smart pet food bowls, a Spanish company has introduced a wirelessly connected smart mattress. But there's a twist: This mattress is designed to detect - hmm, hanky panky is the technical term, I think.

Cleverly dubbed the Smarttress, the mattress is being marketed to suspicious spouses in Spain. If you're concerned that your partner may be having an affair at home, while you're away, just replace the bedroom mattress with the Smartress and wait for results.

The Smarttress, you see, features concealed sensors that detect suspicious activity on the bed. Specially programmed algorithms flag said activity and send an alert to a connected mobile phone app.

"If it detects suspicious activity regarding time of use, frequency, intensity or speed, it sends a notification to the phone terminal with which it is linked," engineer Iván Miranda told The Telegraph.

The company behind the Smarttress is citing some interesting numbers to promote the mattress as a public service. Evidently, polls show that Spain has higher rates of cheating than any other European nation. The notorious Ashley Madison online service has more than 1 million registered Spaniards.

"Seeing the latest research on infidelity in Spain and considering that 94 per cent of Spaniards' preferred place for love-making was in their own home, we thought we could give peace of mind to men and women, not only at night, but also during the day when they have to go out to work," company spokesman José Antonio Muiño told The Telegraph.

Also, FYI, the sensor network used in the Smartress is technically referred to as the Lover Detection System. The cost of a basic double-bed size Smarttress is around £1,200.

Here's the Spanish language commercial, which is worth watching all on its own. Drama! 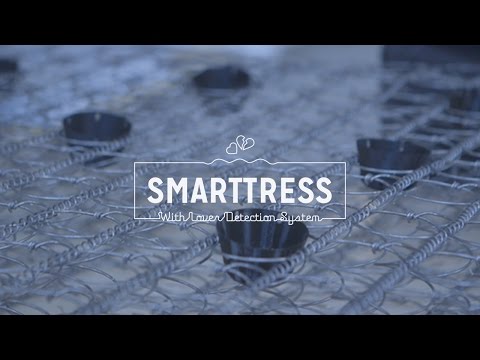 This week on Tasty Tech, we have a vertical rollercoaster, a giant field of light and a canoe that is really a casket.

Amazon's downtown headquarters started taking shape last year, and there's been some buzz about three intersecting spheres under construction. Not yet named, the domes will serve as the visual focus and heart of the company and give employees 65,000 square feet of green space.

The new GaleForce coaster, which is opening this summer at Playland’s Castaway Cove amusement park in New Jersey, is the latest in a growing list of vertical coasters that pack fun and thrills into a small footprint. Instead of long meandering tracks, these coasters offer shorter rides with more vertical excitement.

Artist Bruno Munro created a beautiful light display in the Red Desert of Australia. Munro named it Tili Wiru Tjuta Nyakutjaku, which means “looking at lots of beautiful lights” in Pitjantjatjara, the language of the Aboriginal locals. Munro used a web of fiber optic lights and acrylic orbs in various colors to create the field of lights. See more

You might not know by looking at it, but these structures are part of an outdoor workout facility. Called Leopard Tree, the structures are made from fiber-reinforced concrete, stainless steel and high quality wood. The nine stylish workout islands were designed by Vito Di Bari for the company My Equilibria and can be seen at the Salone Del Mobile in Milan, Italy.

In the last 15 years, the city of Gurgaon, India, has gone from 173,000 people to nearly one million. As a result, getting around is a major challenge. A pilot project for rapid transit is underway to relieve the congestion. If funded, the Metrino personal rapid transit will connect Gurgaon to New Delhi, eight miles away. The driverless taxi pods will hold five passengers each and travel between 16 stations on elevated tracks.

Designers of this hyperboloid tower want to bring farming to the city. The London firm Rogers Stirk Harbour + Partners conceived of a bamboo-framed building that has water tanks and wind turbines at the top and markets and restaurants at the bottom. The tower can support aquaponics as well as traditional soil-based gardening and produce its own clean energy.

Phoenix Boatworks wanted to challenge the idea that a casket has just one purpose. To that end, they offer handcrafted canoes that can serve multiple purposes. In life, it can function as a beautiful bookcase and then when the time comes, offer a final resting place for that last bon voyage.

Artist Mark Sturkenboom's crystallized art evokes a future thousands of years from now when possessions of the present are covered in mineral deposits. Called Overgrown, the pieces are covered in a solution that promotes crystal growth over time. You can purchase them

This ultrathin, ultraflexible sensor from researchers at Tokyo university was made using organic light-emitting diodes. It displays biological readings measured through the skin, such as a person's blood oxygen level and heart rate.

An exotic and unstable form of carbon called carbyne could now be the strongest of all known materials. Using computer models, a team of Austrian researchers found a way to stabilize carbyne atoms into a monodimensional chain twice as strong as carbon nanotubes and stronger than graphene.