A specially trained canine has been honored by Guinness World Records for being the first of his kind to drop from an airplane.

A dog named Arrow has leaped his way into the Guinness World Record book, as "the world's first skydiving, anti-poaching dog."

The German shepherd, trained to fight poaching in Africa, made his first jump at Waterkloof Air Force Base in Pretoria, South Africa with his handler Henry Holsthyzen, of The Paramount Group's Anti-Poaching and K9 Academy.

Arrow is among a group of canines trained at the South African academy to search large areas for firearms, poachers themselves and bush meat. The dogs also find snares set by trappers, in hopes the devices can be removed before wildlife sets foot in them. "These dogs are extremely useful against very skilled poachers using advanced counter-tracking techniques," according to the academy.

The leaping canine got the gig thanks to his temperament, according to The Citizen. Holsthyzen and Arrow are best friends, and dog trusted handler as the duo dropped from the sky. "He's a natural-born skydiver and an adrenaline junkie. I was more scared than he was," Holsthyzen told the site.

"Arrow's story combines all the elements we love here at Guinness World Records: animals, bravery, adventure and a worthy cause," Guinness World Records Editor in Chief Craig Glenday told Seeker in an email. "The anti-poaching team and their canine trainers do inspiring work, so we're honored to be able to welcome Arrow and his owner Henry to the record-breaking family." 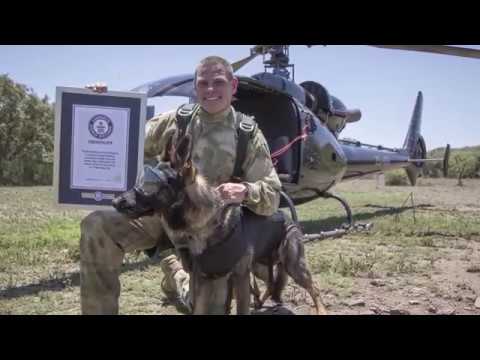