For $2 per photo, Sea Life Aquarium visitors can be the subjects of a very unusual, eight-armed photographer.

An aquarium in New Zealand has an unusual new employee: a cephalopod shutterbug that charges $2 a pop to have your picture taken by it -- for a good cause, of course.

VIDEO: Octopi Have a Brain in Every Tentacle

Kelly Tarlton's Sea Life Aquarium, in Auckland, has a new attraction combining the smarts of an octopus with the latest waterproof-camera tech from Sony. Cult of Mac reports that an octopus named Rambo has been trained -- within three tries, no less -- to use a Sony TX30 camera, a model that's hardened for underwater use. 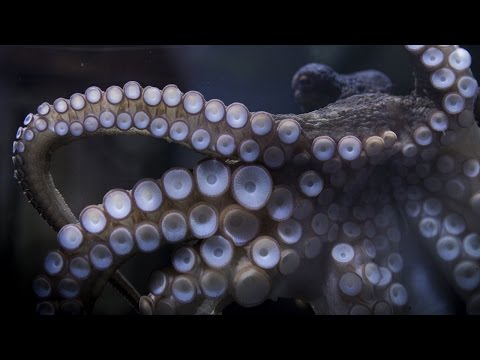 The red button seen in the video above is all it takes -- Rambo simply gloms onto the camera, as octopi are wont to do, and then presses the button with whichever arm is convenient. For $2, aquarium visitors will be able to say, in all seriousness, "an octopus took this" the next time they show friends their vacation photos.

The attraction meets several objectives at once. Sony gets to demonstrate the toughness and water resistance of its TX30 camera; Rambo gets to raise awareness of just how smart he and his cephalopod kin can be; and the aquarium gets to use the proceeds to help fund its conservation programs.

via Cult of Mac

For $2 a pop, New Zealand Sea Life Aquarium visitors can have their pictures taken by an octopus.

A star at the Monterey Bay Aquarium's new exhibit "Tentacles: The Astounding Lives of Octopuses, Squid and Cuttlefishes" is the flapjack octopus. The name was inspired by its flattened appearance. It is among the most anatomically compressed species in the world. The character "Pearl" in the Disney/Pixar film "Finding Nemo" was based on a flapjack octopus.

Flamboyant cuttlefish are colorful, and deadly. Its muscle tissue is highly toxic, making it one of only a handful of cephalopods known to be toxic. They can change color to help them sneak up on prey or to scare predators.

Video: Learn About the Cuttlefish

"Dwarf squid are the smallest squid species in the world," Monterey Bay Aquarium aquarist Chris Payne told Discovery News. In addition to this petite creature, the new exhibit features a dozen living exhibits showcasing rotating appearances by up to two dozen species -- many never exhibited before.

See Photos of the Giant Squid

On the other side of the size spectrum is the giant Pacific octopus. It is the largest octopus species in the world. Adults can weigh hundreds of pounds and have an arm span of more than 12 feet. The giant Pacific octopus is a master of disguise, like many other cephalopods. It can change both its skin texture and color in order to defend itself.

A cuttlefish moves by undulating a delicate fringe that runs along its entire body, but for a quick getaway it expels a forceful stream of water through its siphon, according to Monterey Bay Aquarium aquarist Bret Grasse. When threatened, cuttlefish can produce a cloud of ink called sepia. Long ago, this dark-brown ink was used for writing and drawing.

These are bigfin reef squid eggs, which were collected from the northern Indo Pacific, Monterey Bay Aquarium aquarist Alicia Bitondo told Discovery News. She added, "There are about 300 egg pods in this tank, with about 6 embryos per pod." She and others at the aquarium are breeding the species through multiple generations as one of the featured exhibit animals in the new special exhibition.

Unlike other species of octopus, the day octopus is more active in the daytime than at night. The day octopus originally arrived at the aquarium via a direct flight from Honolulu, Hawaii, since it is native to waters there. It lives in East African waters as well. The large, almost 3-foot-long predators are short-lived. They survive just one year, on average, and breed only once. Cephalopods, in general, don't live for very long, which is why the aquarium is cultivating cephalopods during the exhibition. "These are all short-lived animals," Monterey Bay Aquarium special exhibits coordinator Jennifer Dreyer said. "Many are species that have never been exhibited for very long by any of our colleagues, or raised through their entire lifecycle. This is definitely a first for any aquarium."

Up to 50 nautiluses will occupy a huge exhibit, with a ceiling-to-floor viewing window. These animals like to hide away safely in their protective shells. Many other cephalopods are equally evasive, desiring to blend into their surroundings for protection and to surprise prey. This can make putting them on display challenging. As Bitondo said, "We're trying to display something that doesn’t want to be seen."

A red octopus' normal color is red or reddish brown, but like many other cephalopods it can change quickly -- in a fraction of a second -- to yellow, brown, white, red or a variety of mottled colors. The red octopus is thought to be a clever animal. In 2012, a tiny juvenile red octopus hitchhiked into the Monterey Bay Aquarium on a sponge. It hid in one of the exhibits for a year before being discovered walking across the aquarium's floor in the middle of the night. The discovery helped to explain why so many crabs had gone missing during that period of time. They had gone into the red octopus's tummy. The then out-of-place octopus was eventually released into Monterey Bay, but the species will be represented by others in the new exhibition.

The wonderpus octopus is native to the Indo Pacific region. Each individual has unique white markings on its head, allowing scientists to track individual specimens. It, along with other cephalopods, will be part of the new "Tentacles" exhibit at the Monterey Bay Aquarium. The exhibit opens April 12 and runs through Labor Day of 2016.