A region of the Pacific nicknamed the "Species Factory" due to its marine life riches was on a downward slide just over a decade ago, but an ambitious conservation effort has turned things around for the better.

Populations of sharks, corals and many other species in the region -- the Bird's Head Seascape of West Papua, Indonesia -- are all on the upswing now after 12 years of dedicated work, Conservation International (CI) announced today, World Oceans Day.

CI also announced that a new virtual reality film, "Valen's Reef," chronicling what has happened at Bird's Head Seascape, will be released on June 20.

"A little over a decade ago, the Bird's Head was decimated by commercial fishing, illegal poaching and damaging practices like blast fishing -- the detonation of explosives on the reefs to stun fish and increase catches," Laure Katz, director of CI's Seascapes Program, told Discovery News.

The Bird's Head Seascape is also home to more than 1,765 types of fish, and provides crucial habitat for many iconic endangered animals including whale sharks, manta rays and sea turtles. Over 70 species of reef fishes, crustaceans and corals are found nowhere else on the planet.

"As fish populations plummeted, catch for the same level of effort decreased in some fisheries by as much as 90 percent," she said. "Indonesians living along the coasts saw their livelihoods, and traditional fishing rights, slip away as outside interests profited from plundering the Pacific."

The loss was especially hard because the region previously was described by reef scientists as, not only a species factory, but also a "cauldron of evolution." That is due to the fact that, in an area about the size of Great Britain, it boasts 75 percent of all the world's coral species. There are about 600 unique corals in total, or ten times the number of coral species in the Caribbean.

The turnaround from decimation began in 2004, when the Bird's Head Seascape Initiative was launched. This community-based conservation program involved not only CI, but also local community members, the regional government, and partner NGOs. Together, they helped to create a network of 12 Marine Protected Areas that provide monitoring and management of the coasts, reefs and fish.

"Over the past few months, numerous reports in the media have exposed the alarming levels of climate change-induced coral bleaching on Australia's Great Barrier Reef and many other locales across the Pacific Ocean," Erdmann told Discovery News. "I've just come back from a two-week expedition in Raja Ampat (an archipelago located off the northwest tip of the Bird's Head Peninsula), and our team saw scant evidence of bleaching here in the global epicenter of marine biodiversity."

The reasons for Raja's resilient reefs are complex and numerous, but he believes that one of the most important factors is that the reefs there are normally exposed to a wide variation in temperatures, basically pre-adapting them to climate change. 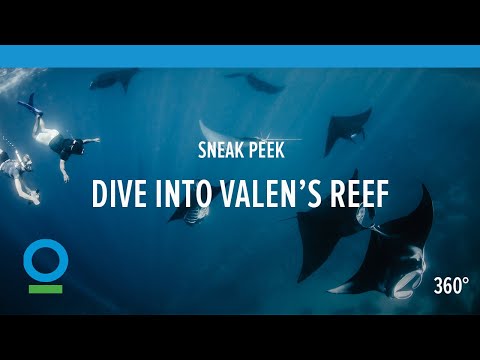 "This makes our conservation efforts in the Bird's Head Seascape all the more important, as these reefs may hold the key to the long-term survival of coral reefs throughout the region," he said.

The film "Valen's Reef" tells of those efforts. Production of the virtual reality movie involved use of an underwater rig designed by VRSE. The crew followed local fisherman-turned-coral-reef-scientist and CI staffer Ronald Mambrasar as he monitored the reefs with his young son, Valen.

In the film, Ronald tells Valen, in Indonesian, the story of how the area was almost destroyed and how the community-led conservation initiative restored it. As a native Papuan and father of four, Ronald describes what it means to protect his home for the next generation.

"Over the course of its twelve years, it has been an unprecedented success -- fish populations have rebounded, sharks, whales and rays have returned, illegal poaching by outside fishers is down 90 percent, coral is recovering and ecotourism has flourished," Katz said. "All of this has been achieved while ensuring access to education and food and providing livelihoods for local people."

A large school of fish was spotted in waters around the Bird's Head Seascape, Indonesia. Fish populations have recovered due to the protected status of the area.

The peninsula's islands are home to three-quarters of a million people, many of whom have ancestral ties to the sea going back thousands of years.

Locals gaze at a whale shark in Cendrawasih Bay, part of the Bird's Head Seascape. With the region's new shark sanctuary, Bird's Head marine life are the most protected in all of Indonesia.

The calm, clear water in Bird's Head allows corals to grow very near the surface in this unique environment.

Although large, whale sharks are not very aggressive.

Both sea and sky show their colors during sunsets at the Bird's Head Seascape, Indonesia.

Due to their popularity with divers, manta rays in the Bird's Head Seascape bring in about one million dollars to the local community over their lifespan.

A school of diagonal banded and yellow ribbon sweetlips is shown. Populations of commercially important fish species like these have been increasing in Bird's Head.

A new species of walking shark was discovered in the region.

The beaches along the northern coast of the Bird's Head Peninsula in the Abun region are home to some of the last nesting sites of leatherbacks, the largest species of sea turtle.

Bird's Head is home to Indonesia's first shark and manta ray sanctuary. This led to Indonesia designating all its territorial waters as a manta sanctuary --the largest in the world.

Manta rays were filmed at Raja Ampat, Indonesia, within the conserved region.

Many sharks are endangered, so news of the increased numbers of sharks at Bird's Head Seascape is promising to conservationists.

The reefs within the Bird's Head Seascape, including these in Wayag Lagoon, are home to more species of marine animals than anywhere else on Earth, according to Conservation International researchers.