A paddleboarder ventures into a group of young great whites with a GoPro when most of us would be running away. Continue reading →

A paddleboarder got up close a personal with great white sharks when he paddled among them with a GoPro on his paddle.

Joseph Trucksess told the Orange County Register that he went to Sunset Beach, Calif., near Huntington, because he just wanted to see what great whites were really like.

"I've always been into water and into wild animals," Trucksess told the paper. "My perception of sharks has been so distorted by Jaws and other movies, it was cool to see how peaceful and non-aggressive they are."

Using his paddleboard as a measure, he said the sharks were only about 6-7 feet long, which means they were juveniles.

Experts told the paper that the young sharks were scooping up sting rays that swim near the beach.

Get your heart pounding with the amazing video below! 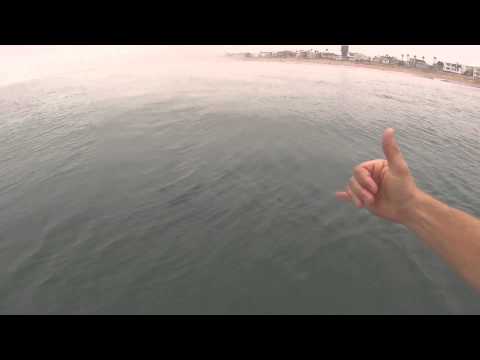 Great whites and other sharks travel on "ocean highways," according to new research that is helping to define the routes. Mapping out the routes is enabling scientists to better understand the behavior of these apex ocean predators and to improve conservation tactics. Ongoing research also shows how busy both the sharks and these highways can be. "The sharks do show repeated travels along the same general paths, which is quite amazing since there are few 'road signs' in the open ocean," Mahmood Shivji, director of Nova Southeastern University's Guy Harvey Research Institute and the Save Our Seas Shark Research Center, told Discovery News. As for how the sharks know where to go, he added, "The main current hypothesis is that they use the earth's magnetic field to navigate, like some birds do." Great whites are among the most well-traveled sharks, swimming for thousands of miles with relative ease. In the winter, they migrate from the California and Baja coasts to a mid-Pacific open water area dubbed "The White Shark Café." Precisely why great sharks do this, however, remains a mystery.

For the research projects, Shivji and his team are affixing satellite tags to multiple shark species. The tagging itself can be arduous, since the scientists are so close to the toothy predators. "This type of tracking research needs to be long-term to really reveal and understand patterns of shark migrations," he said. "Such long-term studies are difficult and expensive to conduct, in part because working on the ocean and with big animals poses considerable challenges."

Once tagged with a satellite-tracking device, the sharks often need a bit of stimulation to get them back on their particular ocean route. This can be a dangerous hands-on process, as this researcher demonstrates.

Sharks, Humans Living So Close; Why Not More Attacks?

Shortfin mako sharks continue to astound researchers, given the duration and miles involved in their migrations. "Our long-term satellite tracking data is showing that individuals can travel over 10,000 miles in a single year, and they also are starting to show indications of round-trip, repeated and predictable migration patterns," Shivji said.

Along their highway-like migration routes, sharks seem to primarily stop for three things: food, sex and babies. Here, lemon sharks stop for their babies. Research conducted in Bimini in The Bahamas, spanning almost two decades, shows that female lemon sharks that were born there returned 15 years later to give birth to their own young. Some sharks never seem to forget home sweet home, even if it is a temporary safe-feeling spot before traveling begins again.

Sharks With Friends: The Most Social Sharks

Tiger sharks have been in the news lately because Shivji and his colleagues determined that these sharks undergo remarkable, bird-like migrations. The findings were published in the journal Scientific Reports. "The tiger shark migrations are bird-like in the sense that they seem to be following the same general round-trip, repeated migrations from warm over-wintering areas to temperate summer areas," he said. One tiger shark, named Harry Lindo, was tracked traveling more than 27,000 miles, possibly the longest-ever recorded distance traveled by any species of shark. "It is truly remarkable," Guy Harvey, a renowned marine artist, conservationist and fisheries ecologist said. Harvey has been working with Shivji on the shark tagging projects. Brad Wetherbee, another researcher on the team, noted that tiger sharks seem to have their own "café" as well, except they have given it a different name. "We joke that tiger sharks, not being media stars like great white sharks, wouldn't be comfortable in a 'café' and prefer to hang out in their 'truck stop' in the mid-Atlantic," Wetherbee, who is based at the University of Rhode Island, said.

As they travel, sharks may go solo or with companions. Here, an oceanic whitetrip journeys on its own. This species has been in decline around the world due to overfishing, the researchers said. Oceanic whitetip sharks used to be one of the most common sharks seen close to the water's surface, but that's no longer the case. In terms of its journeys, Shivji said, "The initial data are suggesting that, although they are highly migratory, they don't travel as far out into the open ocean as the shortfin makos and tiger sharks do in the Atlantic -- an unexpected finding."

How to Reduce Shark Attacks

This oceanic whitetip shark is definitely not traveling solo. Accompanying it are rainbow runners and pilot fish. The shark serves as a moving bodyguard for the much smaller, weaker fish. Oceanic whitetips, in turn, benefit from the fishes' presence, because pilot fish eat health-threatening parasites, dead skin and other undesirables off of the sharks. This kind of win-win arrangement is called "a mutualistic relationship."

Caribbean reef sharks also undergo migrations, with females traveling to "nursery" waters northwest of the Brazilian coast. These sharks, dubbed "the silent sea predators," are formidable hunters, but thankfully pose little threat to humans because they tend to avoid interactions with us. In this case, a bait ball containing fish and other edibles was intentionally dropped into the Caribbean reef shark's territory, leading to a feeding frenzy. Shivji said that tracking all migratory sharks poses major challenges, especially because sharks cover so much territory. This further poses conservation challenges, since waters off the coasts of multiple countries are involved, all linking up into the shark highways. "The shark long-term tracking will show where and when they spend the most time during their travels on a predictable basis," Shivji said. "Once we know this, fishery regulation and protection become more tractable since they provide geographic areas to focus management and conservation efforts on."