Today's mobile phones can do a lot of amazing things. But -- barring obscure accidents -- they tend to stay the same physical shape and size when you hold them in your hand.

But the Cubimorph, a prototype interactive mobile device invented by a team of U.S. and British designers, changes shape on demand, reports CNET.

Shapeshifting Tech: The Morph the Merrier

Made from a set of interlocking touchscreen cubes, the device could completely change how people interact with phones or game controllers, reconfiguring them to suit different needs. Check out the video below. 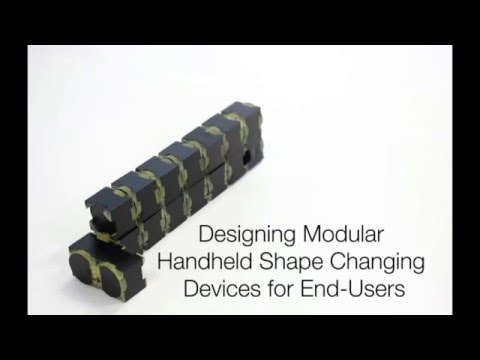 The Cubimorph's interlocking cubes feature individual touchscreens on each of the six module faces. A hinge-mounted turntable mechanism allows the touchscreen cubes to shift and flip, similar to a Rubik's Cube, but also assume different shapes. Devotees of 1980s time-wasters will recognize this as similar to the Rubik's Snake.

The current design is essentially a very early prototype for what researchers hope will be a true shapeshifting mobile device, somewhere down the line.

"Cubimorph is the first step towards a real modular interactive device," says lead researcher Anne Roudaut from the University of Bristol, on the project page.

"Much work still needs to be achieved to put such devices in the end-user hands but we hope our work will create discussion between the human computer interaction and robotics communities that could be of benefit to one another other."

The Bristol research team, in collaboration with contributors from the Universities of Purdue, Lancaster and Sussex, will officially present the Cubimorph at the International Conference on Robotics and Automation (ICRA) in Stockholm.

There are a lot of ways to essentially carve out cross-sections of emerging technologies. You can look at the broad topic areas -- robotics, biotech, computing. You can sort by chronology, geography, industry or application. Or you can just take a notion -- stuff that morphs into other stuff -- and see what pops up. Here we take a look at some images of conceptual and emerging technology based around the idea of changing shape. Across a wide variety of research areas, these are systems and machines -- both very big and very small -- that explore the idea of shapeshifting technology.

, designers are looking at far-future ideas for self-driving cars in which the vehicle interior morphs to suit passenger needs. Since there is no need for actual driving, passengers can recline with the

concept, in which the interior flows and shape itself on command.

A team of London architects is working on the

project, a "folding house" which can reconfigure itself depending on seasonal conditions. Using a systems of sensors, hydraulics and rails, the house rotates and changes shape to optimize air and light.

In 2014, NASA demonstrated its

(ACTE) project, designed to develop a wing surface that can morph during flight. You know those metal flaps on the rear edge of commercial airliner wings? The idea is to evolve the concept with super-strong but flexible materials that would allow the wing to change shape without seams or hinges.

that could morph into different shapes within the human body. The tiny networked robots would travel through the body's circulatory system and could be electronically networked to assume different shapes for certain tasks -- clearing an arterial blockage, say, or stimulating a particular muscle.

Meanwhile, researchers at Cornell University are getting even smaller with a microscopic material they compare to the Terminator T-1000. Made of synthetic DNA, the

can be formed into a solid shape, then flow like a liquid, then return to its original shape. The gel could be used to administer medicines more precisely -- delivering drugs to the site of an injury, say, and reforming to exactly fit the space inside of a wound.

Back over at Tuvie, designers looking way down the line have envisioned a new kind of touchscreen device. The conceptual

would use a layer of nanoparticles to physically alter the screen beneath your fingers -- popping up buttons, images, 3-D maps or even Braille instructions. The concept

phone, pictured above, proposes nanotech components that are flexible, stretchable and transparent.

Shapeshifting furniture is a concept that continues to generate interest. The

is looking at a near-term design, the TRANSFORM table, that employs 1,000 independently operating columns to change the table surface in response to human gesture. The idea is to move toward furniture that anticipates intent, and morphs accordingly.

A group of scientists in Switzerland is taking the idea of shapeshifting furniture a step further. They've developed a prototype set of small robotic modules called

that can self-assemble and morph into different shapes. The mobile robots are also designed to hook into walls, floors and existing furniture.

Then there are the really big ideas. The

is a concept design that would use advanced ceramics, fibers and carbon nanotubes to create a massive flying superstructure. The carrying capacity would be so large that, upon landing, the plane could be morphed into a mobile power station, water treatment plant or even a three-story, self-sustaining hospital.