Seven New Frogs Found, Including Four That Could Fit on Your Fingernail

All of the newly found frogs are nocturnal and four tiny ones sound just like insects.

Seven new species of frogs have just been discovered in the Western Ghats region of India, with four being among the smallest known frogs in the world.

All of the frogs belong to the genus Nyctibatrachus - commonly known as night frogs due to their nocturnal ways - with a lineage that goes back to the Dinosaur Era 70–80 million years ago, the study in the journal PeerJ reports.

"Over time, they have evolved and diversified to enable them to occupy new niches and habitats," said lead author Sonali Garg, who undertook this study as part of her PhD research at University of Delhi.

"Four out of seven newly discovered species are miniature-sized and have insect-like calls," added senior author SD Biju, a professor at the university who, over the course of his career so far, has helped to discover more than 80 new amphibians.

"Their calls resemble those of crickets and katydids, which are quite common in the habitats where these new frogs were discovered," Biju said. "We don't really know the advantages that a frog could possibly be getting by sounding like an insect. Probably it helps to avoid predators, but this needs to be studied." 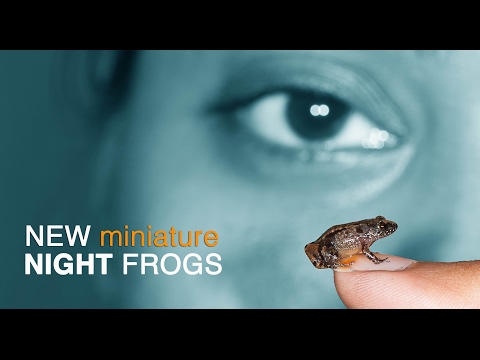 The frogs' nocturnal lifestyle, combined with the tiny size and insect-sounding calls of the four smallest species, helps to explain how they went undetected for so long.

The four that could sit comfortably on a human fingernail are the Sabarimala, Vijayan's, Manalar and Robin Moore's night frogs.

As for why they evolved to be so small, Garg explained that "miniaturization can provide various evolutionary advantages, such as opportunities to occupy new environments and habitats and to exploit alternate food sources. Miniature forms physically also require smaller niches compared to larger forms, and their sizes can be helpful in avoiding predators."

"Smaller forms can reach reproductive maturity at an earlier age, which can also be an important advantage for any species to successfully propagate," she said.

Biju said all the frogs are "friends of farmers," because the frogs eat millions of insects that damage to crops. The new frogs may also hold medical potential since research on other frogs has led to medical advancements. For example, frog skin-derived compounds known as alkaloids are being investigated as a substitute for morphine. In terms of ecosystem benefits, frogs not only help to keep insect numbers in check, but they also serve as food for birds, snakes and other animals.

RELATED: Why Frog Tongues Are So Fast and Sticky

The Western Ghats, plus nearby territory in Sri Lanka, is proving to be a frog and other amphibian hotspot - 159 new amphibian species were found there from 2006–2015. Only the Brazilian Atlantic Forest area tops the Western Ghats-Sri Lanka region for more amphibian discoveries over the same period (182).

Larger mammals in these areas often receive star conservation status, but Biju said it's important to not forget the small inhabitants of these biodiversity hotspots.

"In the forests, many frogs live along with many large and charismatic animals, and can be protected by conservation measures that aim to protect those areas in general," he said. "However, habitat destruction and fragmentation can have larger impacts on smaller animals like frogs, because they occupy small ranges. Any small alterations can sometimes wipe out their entire population from an area."