A tiny Arctic mollusk flaps its 'wings' the same way a fruit fly does.

Underwater flight. That's what researchers in a new study are calling the undersea maneuvers of a sea snail that swims like a flying insect.

The sea snail in question is a species called Limacina helicon that belongs to a group known as sea butterflies. Despite its size (shell height only about 6 millimeters) it's a predator that feeds on plankton, making webs of mucus to trap its meals. The tiny marine mollusk propels itself through the water on wings, if you will, that protrude from an opening in its shell.

How Snails, Clams Are The Ultimate Survivors

Scientists knew about the critter, but they didn't know a great deal about how it moved through the Arctic and sub-Arctic waters it calls home. Simply put, no one had been able to get a good look at how fluid flowed around the delicate creatures as they swam.

That changed, however, when David Murphy, of the Georgia Institute of Technology, created a 3-D visualization system that would let researchers analyze how fluid moves around tiny animals. Have a look: 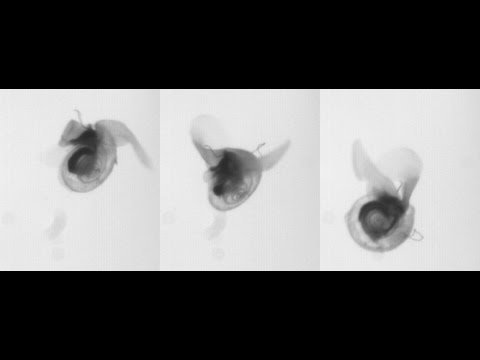 Once Murphy and his colleagues were able to watch the sea butterfly in a special tank, visualizing its "wing" beats through the water, they noticed something that amazed them.

They'd expected the animal to use its wings like paddles in a boat, as do most zooplankton, but something else altogether happened.

"I said to myself, ‘Its wing stroke is just like what an insect is doing'," Murphy said in a press release. The underwater denizen was beating its wings in a figure-eight pattern, just as flying insects do.

Weird Sea Mollusk Has Hundreds Of Eyes Made Of Armor

"No one has actually been able to measure the flow around an insect doing this while it is flying, so that was kind of the holy grail of this area of research," Murphy said. "It really surprised me that sea butterflies turned out to be honorary insects."

The complete findings about this underwater aviator have been published in the Journal of Experimental Biology.