What looks like an unsightly bruise in an otherwise serene view of our blue Earth is actually the effect of a rather special astronomical event that occurred on March 9.

What looks like an unsightly bruise in an otherwise serene view of our blue Earth is actually the effect of a rather special astronomical event that occurred on March 9 (Wednesday).

Imaged by NASA's Earth Polychromatic Imaging Camera (EPIC) on board the NOAA Deep Space Climate Observatory (DSCOVR) spacecraft, a series of photos captured the total solar eclipse as it blocked the sun's light. This event was the only total solar eclipse of 2016 and only observers in the South Pacific had the opportunity to see it. But fortunately for DSCOVR, the satellite will always have a near-perfect view of all solar eclipses on our planet, regardless of where they occur.

DSCOVR was launched in 2015 and sent to orbit the sun-Earth Lagrangian Point L1 - an island of gravitational stability where the gravity of the sun and Earth balance out. This particular location is approximately 1.5 million kilometers (1 million miles) from Earth in the direction of the sun, a perfect location for studying space weather phenomena (such as the solar wind) to understand how the sun's radiation impacts our planet.

ANALYSIS: An EPIC View of the Moon in Earth's Orbital Embrace

The spacecraft is constantly looking at the Earth's sun-lit hemisphere and the EPIC instrument's sole purpose is to constantly stare at the Earth, loading images to the internet in near-realtime.

Previously, the mission has also spotted the moon transit across the Earth's disk, revealing its sun-lit far side.

Watch the eclipse from the ground as the moon blocks the sun, revealing our nearest star's corona and occasional prominence: 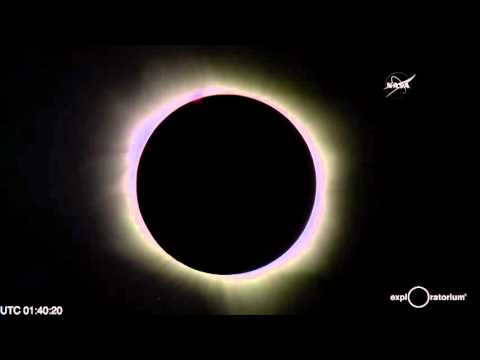 These are EPIC views of the Earth before and during the total solar eclipse over the South Pacific.

With hurricanes, floods, massive thunderstorms, heat waves and wildfires, we might be inclined to believe that the weather on Earth is sometimes less than hospitable to the life that inhabits it. But compared to other planets, stars and other bodies in the cosmos, the weather on Earth is downright mild. In this slide show, explore what conditions are like elsewhere in the universe. By the time you're done reading this slide show, you'll know exactly what to say the next time you hear someone whining about the weather: "Quit complaining. At least we don't live on HD 209458b."

The Sauna Planet "It's not the heat; it's the humidity" is a common expression on especially muggy days in the heat of the summer. But on exoplanet GJ 1214b, we guarantee you won't notice the difference. Located about 40 light-years from our planet, this super-Earth waterworld is believed to possess an atmosphere of dense steam. The exoplanet is between two and 10 times larger than Earth and located approximately 70 times closer to its parent star. Essentially, this planet is one giant sauna, turned up to temperatures in excess of 1,000 degrees Fahrenheit (537 degrees Celsius).

Mars Storms Hurricanes are the largest storms on Earth. With powerful wind gusts and heavy rains, the storms can take a devastating toll on millions at a time. But in terms of size, they can't compare to the dust storms that can roll across Mars and affect the entire planet. In fact, some storms are so large that amateur astronomers can occasionally view them using ground based telescopes. During dust storms, wind gusts can reach up to 300 miles per hour, far stronger than any storm ever recorded on Earth.

Supersonic Planet If you're a windsurfing enthusiast, HD189733b may be just the right place for you. That is, at least it would be if it weren't 60 light-years away and orbiting its parent star so closely. Classified as a hot Jupiter, this gas giant hosts wind speeds that exceed the speed of sound. And since, as Adam Showman of the University of Arizona Lunar and Planetary Laboratory explains, the speed of sound of HD189733b is 10 times faster than it is on Earth, that's a pretty significant accomplishment. To put a number on it, the winds can reach speeds of around 6,700 miles (10,870 kilometers) per hour. That should help to cool down any potential visitors, since the temperature on the surface of the planet facing the sun can reach 1,700 degrees Fahrenheit (926 degrees Celsius).

Tidally Locked World Located some 150 light-years from Earth, HD 209458b is a hot Jupiter with one major convenience: You never have to bother to set your watch. The planet is in a tidally locked orbit with its parent star, meaning one side is always facing the sun and the other side is stuck in perpetual night. Because of this disparity, the planet also has strong winds similar to those of HD189733b. However, wind speeds on this planet only reach 4,500 miles per hour, making it a better option for a thrill-seeking windsurfer who might still be holding out hope of keeping a hair or two in place.

Forget Jupiter The swirling storm at the center of Jupiter's Great Red Spot might get all the attention in our solar system. But that storm is a tiny tyke compared to the one on this brown drawf. Affectionately called "2MASS J21392676+0220226," this brown dwarf is located approximately 47 light-years away.

Solar Storms Unlike the weather mentioned in every other entry on this slide show, storms on the sun can have a significant impact on life on Earth. As storm activity increases in frequency as the sun approaches its solar maximum in its 11-year cycle, solar flares and coronal mass ejections can threaten the functionality of satellite systems, affecting computer, navigation and telecommunications networks on Earth, as well as potentially disrupt power grids. Unfortunately, an umbrella won't do us much good in the event of a massive solar storm as the sun blasts plasma particles at Earth at speeds of hundreds of miles per hour. But that doesn't mean there's reason to panic, either. (Not yet, anyway.)

Honorable Mention: Black Holes If you're chasing massive storms in space, nothing quite rivals the strength and intensity of the tidal forces created by a hungry black hole. When black holes tear into stars, they pull in gasses from that star at such high speeds as to create bright gamma-ray bursts that are detectable from Earth. Anything that comes near a black hole is stretched out, then ripped apart and smashed together again with other matter at velocities approaching the speed of light. If there's one storm you absolutely don't want to get caught in this year, it's one created by drifting too close to a black hole.