Paddleboarders in Austraia found more than they bargained for at the water's edge. Continue reading →

When the members of Elemental SUP's class headed to the beach the other morning, they presumably planned on a gentle stand-up paddling class under the bright Western Australian sun. They surely didn't imagine that, within a matter of days, they'd be in a viral video, courtesy of the sight that met them when they gathered on the shore at Bicton Baths in Perth.

A salmon feeding frenzy was churning up the water. 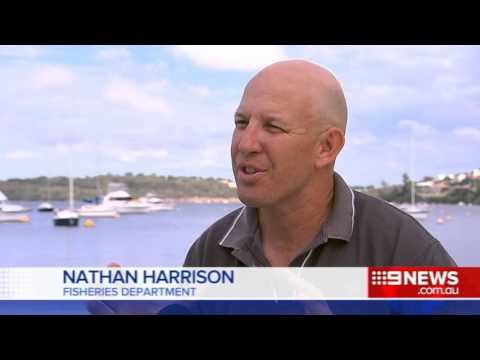 "It was amazing to see - the water looked like it was boiling," Elemental SUP's owner, Caroline Bradley, told PerthNow. "We've been paddling on the Swan River for seven years and never observed anything like that before." Not everyone, she said, had the opportunity to stay out of the water before the frenzy began. "One lady snorkelling was surrounded by them and a man grabbed a salmon with his hands."

Feeding Frenzy Video Shows How Sharks Can Beach Themselves

Similar scenes were reported elsewhere in the region, as large numbers of Australian salmon - which, despite their common name, are more closely related to perches than to northern hemisphere salmonids - pursued even larger numbers of anchovies in what fisheries managers took as a sign that the area was experiencing its "best salmon season in recent memory."

Such feeding frenzies - in which predators become almost overwhelmed by a super-abundance of available prey - are not inherently rare, although humans are not always around to view them. But when they do occur, they are invariably spectacular, whether they involve salmon, sharks, dolphins or other species.

But at Bicton Baths, all is now once more quiet. The Elemental SUP Facebook page has resumed posting photos of people standing calmly on their paddleboards, with nary a salmon to be seen; and class is back in session.

Plans for a peaceful stand up paddle class in Australia were interrupted by frenzily feeding fish. (Photo is of SUP paddlers in Florida.)