Where Did The USSR Secretly Test Nuclear Weapons?

As the Cold War began to heat up, the Soviet Union & U.S. conducted secret nuclear tests. What are the forgotten sites of the atomic age? 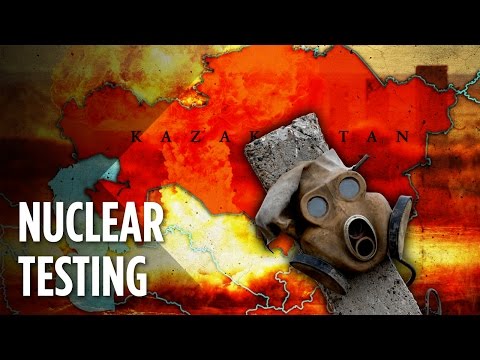 Russia and the U.S. own about 90% of the world's supply of nuclear weapons. The use of these weapons by both countries has resulted in tragedy on more than one occasion in history. Sadly, some of the impacts from these nuclear detonations continue to affect people today.

In addition to dropping atomic bombs on Hiroshima and Nagasaki during WWII, the U.S. also tested a hydrogen bomb on the island of Bikini Atoll in 1954. Nearby residents were exposed to harsh levels of radiation, and marine life around the island was destroyed. People who visit the area still risk radiation exposure presently.

Russia's testing of nuclear weapons was even more extreme, and the effects continue to have tragic results. In 1949, Russia (then the Soviet Union) dropped atomic bombs in an area that is now Kazakhstan, called Semipalatinsk, or the Polygon. One of the nuclear program's architects claimed this area was uninhabited before testing began.

Unfortunately, he was very wrong. There were actually about 1.5 million people living here when the nuclear tests were carried out.

RELATED: What Does Nuclear Fallout Do To Your Body?

Some reports say that choosing this site was actually intentional, and the residents themselves were used as guinea pigs for Russian scientists to study the effects of nuclear weapons. For 40 years, the Soviets detonated bombs here, with tests occurring almost every single day.

But it didn't end with those exposed to direct radiation. When Russia left the area, they walked away without finishing the clean-up, leaving radioactive material behind. 1 in 20 children born in the Polygon still suffer birth defects to this day and the suicide rate is 4 times higher than the rest of Kazakhstan as a whole.

RELATED: Where Are The World's Nuclear Weapons Stored?

In 2001, in an unprecedented occurrence, Russia, the U.S. and Kazakhstan joined forces to clean up the rest of the radioactive material from the Polygon. The project wasn't completed until 2012.

Due to the decades of suffering endured by Polygon residents, Kazakhstan is spearheading efforts to ratify the Comprehensive Nuclear Test Ban Treaty. The goal is to put an end to all nuclear detonations around the world. For this to go into effect, all 44 countries who created the treaty must agree. Currently, China, Egypt, Iran, Israel, India, Pakistan, North Korea, and the United States are still holding out.