In the latest indignity for the human species, scientists in Switzerland have developed a robot that can consistently defeat experienced players in the time-honored game of foosball. It's depressing is what it is, but I suppose we must soldier on and report the news.

The foosball robot has actually been in development for several years now, as a kind of side project for grad students in the Automatic Control Laboratory at Switzerland's École Polytechnique Fédérale de Lausanne (EPFL).

It works like this: A high-speed camera under the foosball table's transparent floor tracks the ball's movement at 300 frames per second. Those images are then processed by a computer which sends actuation commands to an attached system of motors. The motors, in turn, are connected to the handles -- the spinny things, if you want to get into technical jargon.

The robotic system was recently upgraded with high-dynamic linear motors, typically used in manufacturing, which serve as the robot's agile and powerful "arms." The upgrade gives the robot increased speed and shooting power -- to the point where it can now defeat the lab's best human players on a regular basis.

Designers say that, as of now, the robot works with a very simple strategy. See the ball, stop the ball, then shoot the ball toward the opponent's goal.

"It's a very basic strategy, but it works surprisingly well," says researcher Christophe Salzmann in EPFL press materials announcing the breakthrough. "At this stage, the system is like a bodybuilder with a tiny brain."

Salzmann and the team are working on adding more complex elements, like algorithms that can predict the ball's path and lasers to determine opponents' hand positions on the spinny things. The also hope to develop a system in which two robotic foosball players can go up against each another. 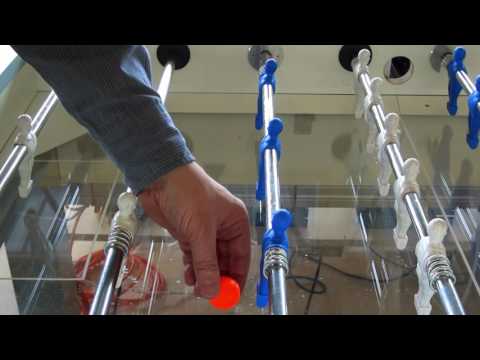