Resurrected From Dead, Oryx Returns to the Wild

Scimitar horned Oryx are now back in the wild thanks to a breeding and monitoring program.

Photo: Scimitar-horned oryx are reintroduced to Chad grasslands. Credit: John Newby, Sahara Conservation Fund Thirty years after the scimitar-horned oryx was driven to extinction in the wild, the desert antelope is back in its native Chad. A dramatic reintroduction was was captured on video on Sunday.

The herd of about 20 -- resulting from a successful captive breeding program -- excitedly left their enclosure, except for one female that was not ready to venture out and a male that returned from his brief stint in the wild to be with her.

RELATED: How Do Animals Find Their Way Home Without GPS?

The reintroduction is being led by the Environment Agency-Abu Dhabi (EAD), the government of Chad and the Sahara Conservation Fund. The Smithsonian Conservation Biology Institute (SCBI) and the Zoological Society of London are leading post-release satellite-tracking efforts that the researchers say will result in one of the most comprehensive studies of any wildlife species returned to its native habitat.

The following video shows an oryx being released. The actual moment starts at about the 2 minute mark. 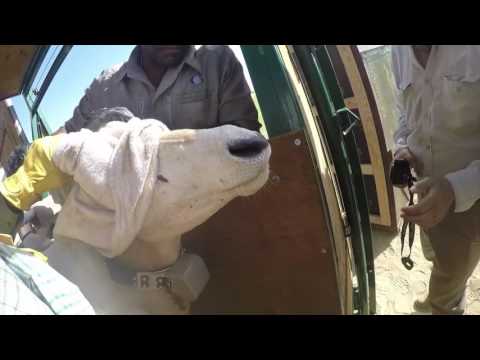 "This is an epic homecoming for this majestic species and a significant step forward for wildlife conservation," said Steve Monfort, a director at SCBI. "Every conservationist aspires to ensure that wildlife thrive in their natural environment. This project was designed to ultimately give scimitar-horned oryx that chance, while also helping restore this grasslands ecosystem and to inspire and inform similar reintroduction efforts for other species."

Twice a day SCBI postdoc Jared Stabach and his team will receive the position of every animal collared, revealing where the oryx go seasonally, how far they travel, whether they stay together or disperse into different social groups, and even if a poacher has taken an animal.

RELATED: Black-Footed Ferrets Back to Where They Once Belonged

While it's impossible to prevent all poaching in the area, the researchers have taken steps to safeguard the oryx. Rangers have been hired to patrol the region, and the release was planned for the rainy season when better resources are available.

Over the next five years, the researchers hope to release 500 oryx and create a self-sustaining population. The released animals come from EAD's "world herd" of oryx, including animals raised in human care from the United States, Europe and the United Arab Emirates.

There is further reason for optimism: Stabach shared that a few of the females set for release may be pregnant.

"If a few calves are born soon after the release, they may imprint on the release site and return periodically," he said, adding that his colleagues will be providing water during dry periods which may also help imprint the herd to the site.

"It would be a momentous occasion," he said. "The first oryx born on native soil in decades."