This foxhunt wasn't exactly traditional. While there was a horn blasting, dirt flying and a mad dash over the English countryside, the "fox" was hunting the "hounds." They were also all on mountain bikes.

During the hunt, downhill racing champion Rachel Atherton gave the pack a head start and even got a punctured tire at the top of the course, reports Dirt Magazine, but still managed to pass dozens of racers at top speed.

Back for a third year, the women-only Red Bull Foxhunt event invites participants to "outrun the fox." The previous two events were held on the Pentland Hills outside Edinburgh. This time the mass-start event took place on the Melmerby Scar in Cumbria with a pack of riders that had ballooned to more than 200, all wearing muted plaid blazer-jerseys.

The course in Cumbria went for about 1.27 miles and, despite the rugged terrain, wasn't meant to be cut-throat. The race originated as a mixed event with 28-year-old Atherton's brother Gee giving chase. "I wanted it to be a really welcoming way to get into competing," Atherton told Red Bull about moving it to an all-women format. "For a lot of people, it's the first race they've ever done, and that's awesome."

WATCH VIDEO: The Photos that Made Mountain Biking Cool

Women with varying experience levels participated, hauling their bikes uphill to the race start. Atherton, who hails from Wells in the UK, shouted encouragement as she passed them: "Go girls! Get your brakes off!" and "Nice, nice!" and "Pedal, pedal, pedal!"

Rosie Holdsworth was the first to reach the finish line with a time of 3:44.870. Atherton passed 144 racers to come in 80th place a little bit later, Dirt Magazine reported. While that might not sound impressive, the moment she says, "Oh no I've got a puncture!" in the point-of-view video, I wondered if she would be able to finish at all.

In the Rio Olympics, I remember watching cycling champ Peter Sagan lose what had been a very promising start in the mountain biking event when he got a tire puncture. It was intensely frustrating to see. Other mechanical problems ultimately knocked him -- and several others -- out of the competition.

Clearly this was different. Atherton sped down a fairly short, mostly downhill course whereas the longer, grueling Olympic course required numerous laps. The Foxhunt's mass start did make for tight passing, though. Judging from their speeds over the thick grass, these ladies really did take the brakes off. 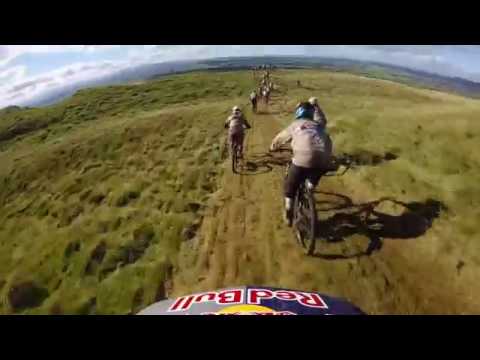