Only the second known sighting of pale killer whale in the wild.

"Suddenly a group of orcas approached us, and right next to the boat, a white orca surfaced," scientists from the expedition noted on Faceboook. In the video below, the pale orca (a.k.a., killer whale) can be seen swimming near the vessel. 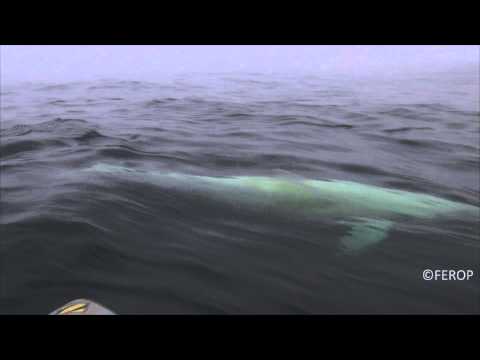 The scientists speculate that the creature, despite how large it may already look to the untrained eye, is probably still a juvenile.

Albino orca are extremely rare to witness in the wild, as they are believed not to live very long. The first-ever recorded sighting of an adult white orca also occurred off Kamchatka in 2012, as the BBC reported. That creature was also witnessed by the FEROP team.

This juvenile white orca appeared alongside the boat of researchers off the coast of Eastern Russia.

The world's oldest orca, affectionately known as "Granny" and an estimated 103 years old, paid a visit to the waters off Washington state on May 9 alongside her 25-member pod, "J-Pod." The sighting was a treat for the tour guests of Captain Simon Pidcock's Ocean EcoVentures. Pidcock took the chance to capture Granny in this series of photos.

The grand dame and J-Pod for the majority of the year patrol the waters between the north coast of British Columbia and Northern California.

Pidcock said Granny was instantly recognizable by her saddle patch, a white area whales have on their dorsal fins.

J-Pod was reportedly seen about one week earlier in an area off Northern California -- some 800 miles away from this appearance. This leaves whale watchers feeling confident about the shape Granny is in, if she can make such amazing journeys.

Granny's birth year designation of 1911 derives from her size, the size of her offspring, and comparison photos of the senior-citizen orca from as far back as the 1930s. She was caught once in 1967, but she was released because her age was a bit long in the tooth for sea park life. Who could have imagined that 47 years later she would still be alive and thriving?

Granny's 103 years are about twice the age of the oldest orca in captivity (Lolita, in the Miami Seaquarium, is 50). "It surprises people when they realize this whale was around before the Titanic sank. She's lived through fishing changes and live captures of whales. I would love to know what she thinks," said Pidcock. Photos courtesy of Simon Pidcock and