The little-seen Günther's sea snake has been recorded in the Gulf of Oman, almost 250 miles from the previously known edge of its range.

Photo: Shown is the smallish head of an adult Günther's sea snake. Credit: Mohsen Rezaie-Atagholipour Off the western coast of the Gulf of Oman, a fishing vessel turned up something curious in its by-catch: A rare, venomoussea snake that was 248 miles (400 kilometers) from where it was supposed to be.

Caught in the haul was a Günther's sea snake (Microcephalophis cantoris), a little-seen aquatic animal thought to inhabit only the waters from the western Malay peninsula to the coasts of Myanmar, India, Sri Lanka, and Pakistan.

The animal was found during a sea snake population survey being performed in the Persian Gulf and the Gulf of Oman by a team of Iranian and French scientists.

Almost all sea snakes (Hydrophiinae) live fully aquatic lives. They don't have gills, so, like whales, they have to surface for air. Their tails, shaped a bit like paddles, propel them through the water.

The Günther's sea snake was first discovered in 1864 by zoologist, Albert Günther. It can grow to nearly 5 feet (1,448 millimeters) long for males and almost 6 feet (1,829 millimeters) for females. It has a small head compared to the rest of its body and it's spotted so infrequently that the IUCN "red list" of threatened species designates it as "Data Deficient."

RELATED: Sea Snake Dries to a Crisp Before Rehydrating

The scientists have included the Iran snake sighting in a new sea-snake checklist for the Gulf of Oman and Persian Gulf that has just been published in the journal ZooKeys.

There are 62 species of venomous sea snake globally, spread largely throughout Indo-Pacific waters (the yellow-bellied sea snake, an exception, can be found in all oceans except for the Atlantic). According to the researchers, the new sighting brings to just 10 the count of sea snake species spotted in the Persian Gulf and the Gulf of Oman. Here's one in action, a species called Hydrophis lapemoides: 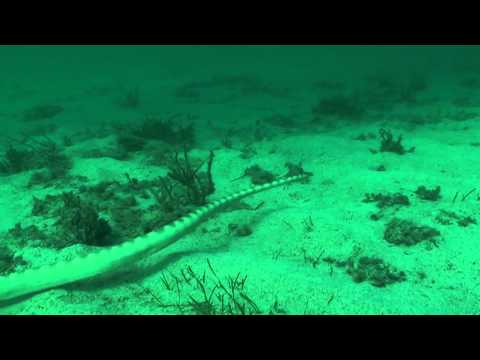