While in pursuit of a poaching vessel, a conservation ships encounters a creature never caught live on camera before.

While tracking a poaching vessel in the South Indian Ocean, a conservation ship encountered a rarely seen brand of orca known as "Type D," snaring what is thought to be the first-ever live footage of the creatures.

The Bob Barker, a vessel owned by the Sea Shepherd Conservation Society, was in pursuit of a ship the organization says was poaching toothfish, when it came upon the pod of 13 rare whales. 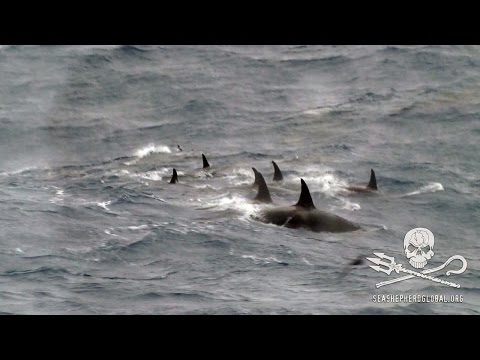 Type D orcas were originally identified in 1955, when a pod of them stranded on New Zealand's Paraparaumu Beach. The animal has rarely been seen since, let alone filmed. They have bulbous foreheads resembling those on pilot whales, and they have small white eye patches and a dorsal fin that's shorter than usual.

Sea Shepherd reports the pod stayed alongside its vessel for an hour, allowing the conservationists to get the footage shown above. The organization says the identity of its video subject has been verified by orca expert Robert L. Pitman, of the Southwest Fisheries Science Center at the National Oceanic and Atmospheric Administra­tion.

"Definitely a Type D Killer whale," Pitman told the conservationists. "I don't think they have ever been filmed alive."

Sea Shepherd said its sighting is just the 13th recorded for the creature.

"The crew watched in awe as the 13 killer whales, including a small juvenile and a large male, used the six-meter swell to surf across the bow," said Bob Barker Chief Engineer Erwin Vermeulen, in a statement. "For almost an hour the surf-show continued and was accompanied by bow riding, tail-slaps and breaches."

A pod of rare killer whales stayed for more than an hour alongside the Bob Barker.

Thanks to an effort by the Vancouver Aquarium and the National Oceanic and Atmospheric Administration's Fisheries department, scientists have used an unmanned aerial vehicle -- or a drone -- to monitor the health, movement and reproduction of killer whales. The team tracked northern resident killer whales off British Columbia, a group currently designated as threatened by the Species at Risk Act in Canada. Its custom-made hexacopter flew more than 100 feet above the whales -- far enough out of mind that the whales would not notice but still close enough to get tons of great detail. Killer whales travel in a family group for the better part of their lives. This family group includes a two-year-old calf (second from top), and a young-of-the-year (middle).

At issue for the team was a central question: Are the whales able to find enough food? These whales, like their British Columbia southern resident counterparts near Seattle, eat Chinook salmon, which are far smaller than they used to be. (Some of the salmon runs are also endangered, the NOAA says.) Here, two northern resident killer whales are photographed by the hexacopter. The whale on the left is in very poor condition and is thought by the researchers to have recently perished. The whale on the right, luckily, is considered healthy and in peak condition.

The drone photos can show scientists how fat or thin individual whales are, as well as which ones are pregnant and which calves are brought to term. In this photo, the female at top appears skinny and in poor condition. The female in the middle seems to be healthy and well fed. The whale at bottom is pregnant, the bulge in her body evident behind the rib cage.

A yearly census of mortality is not the most helpful of measures for how well a whale population is doing, the team says. That's because any problems the whales experience have already occurred and taken the whales' lives. The hexacopter "can give us a more sensitive measure that we might be able to respond to before whales die," said NOAA biologist John Durban in a release.

While the team's research permit allowed it to use a 100-foot limit above the whales for its studies, non-research permits restrict hexacopter approaches to, at closest, 1,000 feet above the creatures.

Here, a moment of playful behavior is caught between two killer whales, as they nuzzle each other, head-to-head.