The stubby squid is part of a family of marine creatures that have demonstrated math smarts.

The distinctive creature, a stubby squid (Rossia Pacifica), looks like a cross between a squid and an octopus, but it's actually very closely related to cuttlefish, which apparently have impressive math skills. The stubby squid, filmed by the exploration team of Nautilus Live, is so cuttlefish-like that it was initially mistaken for one in many of the recent reports. 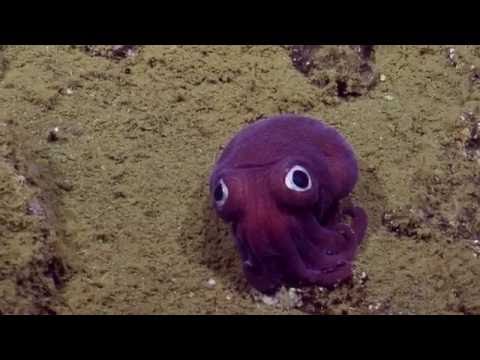 Tsang-I Yang and Chuan-Chin Chiao of the National Tsing Hua University Institute of Systems Neuroscience authored the new research in the journal Proceedings of the Royal Society B. They write: "Cephalopods (cuttlefish, octopuses and squids) have the most complex brains among invertebrates (animals without a backbone), and are known for their sophisticated cognitive behaviors."

Cephalopods are masters of disguise. Even the bright purple stubby squid can become quickly opaque. Here is another squid demonstrating the rapid technique:

Cuttlefish can disappear into their environment, looking like just another bumpy surface within the ocean substrate.

The cuttlefish's eyes can even look like a natural substrate feature.

To test cephalopod number sense, Yang and Chiao conducted a series of prey quantity preference tests using juvenile cuttlefish that were reared from eggs collected in the waters of Keelung and Nanilao, Taiwan. The researchers presented the young cuttlefish with various types of shrimp: large, dead, alive and small. The test subjects had to select between one of two options.

The cuttlefish generally went for larger quantities, and could even be seen mulling over similar choices.

Chiao told Discovery News that he and his colleague "think that cuttlefish think about their choices for a while before making a decision, and this delayed time is task difficulty dependent."

Over time, the researchers realized that the cuttlefish could distinguish number differences above the ratio of 1.25. This means that their number sense is at least equivalent to that of young humans and other primates.

As for why 1.25 is significant, the researchers explained that the figure is just a rough estimate, but that differences below this amount would not matter much to cephalopods.

"Although we are not very sure, we think that number sense could benefit cuttlefish, not only in prey choice, but also in mate choice and navigation," Chiao said.

The findings indicate that all animals with such number sense, including humans, integrate both internal and external information when making quantity and quality decisions about food. Previous research has shown that hunger level alters quantity-related decision-making in humans.

It's believed that many animals have some level of number sense, but it could be particularly advanced in cephalopods. There are several reasons for this.

First, cephalopods like the purple stubby squid are thought to be good learners. They appear to be able to quickly figure out a visual task just by observing others. Second, cuttlefish have proven memory skills that allow them to store such smarts for their future benefit. Their close relatives probably have these memory skills too. Finally, juveniles have to search for scarce prey in nature, so number sense is a life or death matter for them.

Roger Hanlon, a senior scientist at the Woods Hole Marine Biological Laboratory and a professor of ecology and evolutionary biology at Brown University, points out that, until this research, math sense among cephalopods had not yet been assessed.

"No one has seriously questioned how cuttlefish decide which prey to pursue on any daily forage," Hanlon added. "Moreover, the concept of number sense has hardly -- if ever -- been considered as a cognitive capability in this rather brainy animal group."

Since cephalopods are such clever learners, it's intriguing to think of what the true math potential of the purple stubby squid, cuttlefish and other cephalopods might be.

As Chiao said, "We think that, with training, they are capable of more advanced numerical skills."