Off the coast of New Zealand, high-tech video gear attached to the swift cetaceans helps scientists glimpse little-seen behaviors such as mother-calf interaction.

Thanks to special underwater cameras, scientists are getting a rare glimpse of dolphin life as it occurs far from the tour boats and smartphone-snapping hordes – from the animal's point of view.

Researchers from the University of Sydney and the University of Alaska Southeast attached cameras atop eight dusky dolphins off the coast of New Zealand, giving the scientists a look at what each dolphin sees.

The effort won the researchers more than eight hours of little-seen activities such as mother-calf interaction, play time in a kelp forest and intimate contacts the scientists described as fipper-rubbing.

How do you get a camera onto a wild dolphin gliding past your research boat? Carefully, as you can see in the video below, using a long pole to gently stick the device onto the speedy cetacean's back with the help of suction cups.

The cameras were good for six hours of battery life each. Along with video capture, the cameras also incorporated GPS tracking and depth logging. 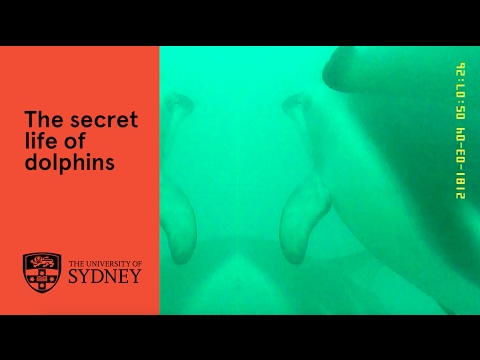 Findings from the camera footage have been published in the journal Marine Biology.

"For the first time, these cameras have given us the opportunity to see what dolphins do on their own terms," said study co-author Gabriel Machovsky-Capuska in a statement. "There were no wildlife crews, no invasive underwater housings, and the dolphins remained largely unaffected by our cameras."

"From the surface, researchers can only see about 10 percent of what is going on in an animal's life," explained University of Alaska Southeast dolphin specialist Heidi Pearson. "With these video cameras, we can 'see' from the animals' perspective and begin to understand the challenges they face as they move throughout their habitat."

For example, Pearson added, the dolphin-view data will help conservationists better understand how stress factors such as shipping vessels and development of coastal lands affect the animals' daily lives.

What's more, the footage will add to researchers' information about the world around the dolphins.

The team next hopes to fine-tune the cameras for use on sharks as well as other species of dolphin.

WATCH VIDEO: Dolphins Give Each Other Unique Names