InSight is the first NASA mission to examine the interior of Mars.

A new NASA mission will help answer questions about martian volcanoes — how long they were active and when — and Marsquakes by examining the Red Planet's interior activity.

InSight, short for Interior Exploration using Seismic Investigations, Geodesy, and Heat Transport, will launch from Vandenberg Air Force Base in California in May. InSight will examine about the composition of the core, mantle, and crust of Mars using a seismometer, a heat probe, and a radio science instrument. NASA mission managers answered questions about the mission in a televised press conference from the agency's Jet Propulsion Laboratory in California on March 29.

While Mars has only 20 named volcanoes, it hosts five gigantic ones. The planet has the largest known volcano in the solar system: Olympus Mons, which towers 15 miles (25 kilometers ) above the martian plain, or three times the height of Earth's Mount Everest. Olympus is part of a vast 2,500-mile-long (4,000 km) volcanic complex at the equator called Tharsis Montes. The four largest volcanoes in the area are Olympus, Ascraeus Mons, Pavonis Mons, and Arsia Mons.

A 2017 study of Arsia Mons in the journal Earth and Planetary Science Letters revealed the volcano ceased erupting about 50 million years ago, a recent time frame in geologic terms. Its activity likely peaked roughly 150 million years ago during the Jurassic period on Earth when dinosaurs were common.

It remains unclear, however, how long volcanism on Mars persisted. A better understanding of volcanism will help scientists not only to better understand the Red Planet's geological history, but also how much volcanic activity contributed gases to the Martian atmosphere. 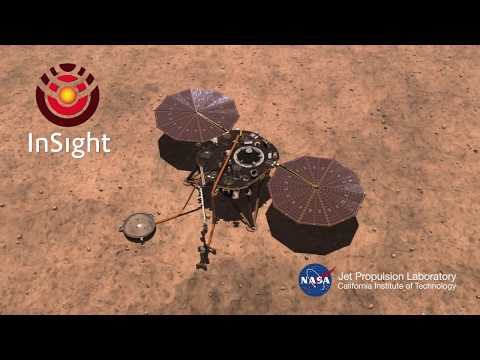 InSight — the first martian mission dedicated to studying the Red Planet's interior — will help answer questions about volcanism, principal investigator Bruce Banerdt said at the NASA press conference yesterday. "The volcanism on the planet is tied to its thermal history, and it's also tied in many ways to the detail of the interior structure," Banerdt, a JPL research scientist, said.

One of InSight's goals is measuring the size and structure of the martian core. A radio science experiment on board the spacecraft will precisely track the lander's location through broadcasts to a set of NASA antennas on Earth called the Deep Space Network.

As Mars orbits the sun, the planet — and InSight, which will be perched on its surface — will wobble slightly. The size and composition of the core affects the magnitude of the wobbles, Banerdt explained. The core also affects how thermally active Mars is. For example, if the core is small enough, Banerdt explained, there will be a rock boundary in the lower mantle that stops heat from escaping. "This would inhibit the development of volcanism," he said.

The onset and persistence of volcanic eruptions also depends on how much heat is generated in the crust, which is closer to the surface than the mantle. If there are more radioactive materials, such as thorium or radium, inside of the crust, they emit heat as they naturally decay. Their heat will in turn generate volcanism, Banerdt explained.

RELATED: NASA Is Testing a Compact Nuclear Reactor to Power Astronauts on Mars

Marsquakes are another indication of internal activity on the Red Planet. The seismic waves they generate will also reveal the composition of the Red Planet's core, crust, and mantle. InSight will likely track between 50 and 1,000 marsquakes during its primary mission of two Earth years, Banerdt said. The rate of activity falls between quake frequency observed on Earth and the moon, he said.

InSight will touch down on a flat, geologically quiet area called Elysium Planitia on November 26. Marsquakes are expected in other regions of the planet far away from InSight. If InSight was closer to the source of the marsquakes, Banerdt explained, the waves wouldn't travel as far through the planet, which would make it more difficult to generate internal measurements of the planet's structure.

Tracking marsquakes will help improve models of how large geologic formations on the Red Planet were created. "The canyons you see are all caused by faults on Mars," Banerdt said. "We can estimate the amount of motion that had to happen on those faults and how that motion is accommodated by marsquakes."

Insight is not the first seismometer on Mars, but it will be the most accurate because the spacecraft has a robotic arm that can place the instrument delicately on the surface. The two NASA Viking landers of the 1970s each carried seismometers. One seismometer, however, broke upon landing. The other seismometer swayed in the martian wind because it was placed on the spacecraft deck, several feet above the planet's surface. Banerdt said its seismic measurements therefore can't be trusted.

"I'm going to be dancing around the room" when InSight measures its first marsquake, Banerdt said. "This is something [I wanted] when I was a graduate student watching Viking. There was a seismometer on Viking, and as a geophysics student it was such a cool thing to do. It was such a disappointment that we couldn't get any data down."