Software engineers and astronomers collaborated to look at data from the Kepler space telescope and discovered worlds orbiting distant stars that human eyes have so far missed.

Software engineers collaborated with astronomers to look at data from the Kepler space telescope to discover worlds orbiting distant stars that human eyes have so far missed.

Hertz and his colleagues highlighted the discovery of an eighth planet circling a star called Kepler-90. This solar system, which lies about 2,545 light-years from Earth, now ties our solar system for the highest number of planets around a single star.

“Kepler has already shown us that all other stars have planets,” Hertz said, “and now we know that other stars can have large solar systems like our own.”

The Kepler spacecraft has collected so much data that it has been impossible to look at it all, even with a cadre of scientists, citizen scientists, and other data mining methods.

“Astronomers have only been able to look at the strongest signals from Kepler,” said Christopher Shallue, a senior software engineer with Google AI. “Machine learning is best where there is too much data for humans to look at it, even if the signal is very weak.” 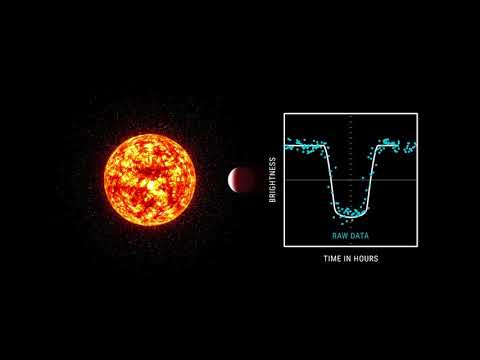 With over 35,000 possible planetary signals from Kepler, so far just over 2,500 have been confirmed as actual planets. Astronomers have looked at just the strongest signals from the 150,000 stars that the Kepler mission studied. But scientists knew there were other weaker signals hiding in the data with no humanly possible way to find them.

Shallue approached NASA and worked with Andrew Vanderburg, an astronomer at the University of Texas, Austin to train a computer to learn how to identify exoplanets, looking for extremely weak signals that might show a miniscule change in brightness captured when a planet passes in front of — or transited — a star.

“A neural network is a technique of machine learning that is loosely inspired by the structure of the human brain in which 'neurons' do a simple computation and then pass information to the next layer of neurons,” Shallue explained during the briefing. “In this way, a computer can ‘learn’ how to identify a dog from a cat, or an exoplanet from something else in the readings measured by space telescopes like Kepler.”

The neural networks could be thought of as switches that turn on depending on the pathways that were created from previous data.

The team used the neural network to look at 15,000 signals that had been previously confirmed as either a planet or a false positive, and the network learned how to distinguish real planets from false signals.

Quickly, the computer advanced to finding the correct answer 96 percent of the time in testing.

Then, with the neural network having "learned" how to detect the pattern of a transiting exoplanet, the researchers directed their model to search for weaker signals in 670 star systems that already had multiple known planets. Their assumption was that multiple-planet systems would be the best places to look for more exoplanets.

“We got lots of false positives of planets, but also potentially more real planets,” said Vanderburg in a statement. “It’s like sifting through rocks to find jewels. If you have a finer sieve then you will catch more rocks but you might catch more jewels, as well."

Vanderburg said versions of machine learning have been used to assess signals, but this is first time that a neural network has been used to identify a planet.

“It is a really powerful tool and it’s exciting to use it to find a new exoplanet,” he said. “This presents a great opportunity for looking at a new regime in the Kepler data — the weaker signals — since smaller planets the size of Earth that are farther from their stars present weaker signals. Earth-size planets so far have been a rare finding, but with the neural network model, we can boost Kepler’s sensitivity and hopefully be able to find these very interesting planets, the smallest, longest period planets.”

The newly-discovered Kepler-90i orbits its star once every 14.4 days and is the smallest planet found so far in this system. But Vandenburg said even though it is a “cool discovery,” we probably don’t want to go visit this world, as it is sizzling hot, likely about 800 degrees Fahrenheit.

RELATED: The Exoplanet Most Likely to Support Alien Life Might Not Be Habitable After All

But the solar system is quite similar to our own, with three smaller planets close to the star and five larger planets farther out. Vandenburg said it is possible that Kepler-90 has even more planets.

“There is a lot of unexplored real estate in this system and it would be really surprising to me if no more planets are found,” he said. “And I suspect that many of these other systems have planets that we haven’t found yet. Maybe there are planetary systems out there with so many planets, they make our solar system seem ordinary."

Asked if this new type of articifical intelligence will replace the work done by scientists and citizen scientists who have already found thousands of exoplanets, the team said definitely not.

“What we’ve developed here is a tool to help astronomers, a way to increase the productivity of astronomers and will not replace them at all,” Shallue said. “In fact, I hope it encourage people to go into astronomy to be able to use these advanced technologies.” 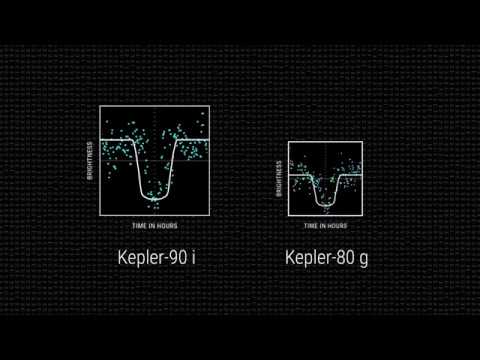 The Kepler space telescope has produced more than 30,000 signals of possible planets circling distant stars. Researchers taught a computer to “learn” how to identify the weak signals of a planet crossing its star using a neural network. A search for new worlds around 670 known multiple-planet systems using this machine-learning technique yielded not one, but two discoveries: Kepler-90i and Kepler-80g.