Pigeons Can Read. Well, Sort Of

Pigeons may be sometimes likened to "flying rats," but these birds are no dummies, according to a new study. Scientists recently taught pigeons to read - kind of.

In a new study, researchers trained pigeons to distinguish real words from gibberish, using 308 four-letter words that baboons had learned in a previous study. Some of the birds learned to identify dozens of words, with the most successful pigeon being able to recognize 58 words, the researchers said.

Four of the pigeons excelled at the word recognition test, and the scientists continued more intensive training with these birds. These advanced pigeons were even able to distinguish correctly spelled words from those with rearranged characters, like "very" and "vrey," or words that were completely misspelled, the researchers said.

"The pigeons' performance is actually more comparable to that of literate humans than baboons' performance," for the misspelling tests, the scientists wrote in the study.

To determine whether the birds were learning to distinguish words from nonwords rather than merely memorizing the correct answers, the pigeons were introduced to new words throughout the study. According to the researchers, the pigeons correctly identified the new words as words at a rate that was significantly above mere chance.

"This transfer suggests that during training, the pigeons derived some general statistical knowledge about the letter combinations that distinguish words from nonwords," the authors wrote.

The researchers suggest that the pigeons tracked the statistical likelihood that certain pairs of letters, such as "EN" and "AL," were more likely to be associated with words or nonwords. 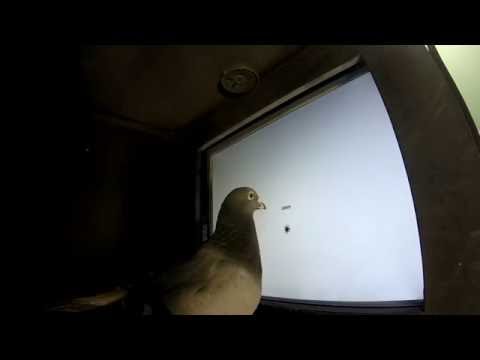 One of the study's authors, neuroscientist Onur Güntürkün of Ruhr University Bochum in Germany, said that it's remarkable that the pigeons have the ability to visually recognize words (known as orthographic knowledge).

"That pigeons - separated by 300 million years of evolution from humans and having vastly different brain architectures - show such a skill as orthographic processing is astonishing," Güntürkün said in a statement.

The new study is the first to identify a nonprimate species as having these orthographic abilities. And the researchers said that by studying the pigeons' ability to learn words, they could provide insights into the origins and function of language.

The study also highlights the intelligence of pigeons, which study co-author Michael Colombo, a professor of psychology at the University of Otago in New Zealand, said may spark the need "to seriously rethink the use of the term 'birdbrain' as a put-down."

The findings were published online Sept. 16 in the journal Proceedings of the National Academy of Sciences.

Copyright 2016 LiveScience, a Purch company. All rights reserved. This material may not be published, broadcast, rewritten or redistributed.