From his vantage point in the air, Antoine Girard soared nearly level with the summits of Pakistan's jagged snowcapped mountains: K2, Broad Peak, and G4.

The French athlete wasn't flying in a commercial aircraft, though. He was bundled up like a mountaineer in a snowstorm, breathing oxygen from a tank, and cruising along in his paraglider, reports Planetmountain.com.

This was no mere jaunt. Girard's surreal flight in Pakistan lasted for seven hours. He started over the long Baltoro Glacier, then headed over the famous rocky Trango Tower to the Concordia confluence before he caught the right thermals to fly over Broad Peak on July 23, Planetmountain.com reported. Reaching a height of 26,761 feet, Girard made history by becoming the first person to surpass the 8,000-meter (26,246.72 feet) mark for high-altitude cross-country paragliding.

The Adidas-sponsored paraglider, who is also an experienced mountain climber, spent weeks in Pakistan preparing. "This is the flight of the century," American adventure pilot Brad Sander, who assisted Girard in Pakistan, told Cross Country magazine. "It's beyond anything anyone has done so far."

Girard manages makes the feat look downright relaxing, but paragliding comes with crazy risks. Earlier this week, paraglider Damien LeRoy's engine stalled right before a turn in Florida, prompting him to bail 150 feet above the ground to avoid crashing. The fall broke his back, femur, pelvis, three ribs, and punctured his lung, ABC News reported. Fortunately, he survived to tell the tale.

RELATED: Paragliding 101: What You Need to Know

Just watching paragliders from the ground here in Colorado, I get nervous that a sudden gust of wind would send them careering into the mountainside. Girard's footage, on the other hand, is far more relaxing to view -- as long as you don't think about how cold his fingers must have gotten. 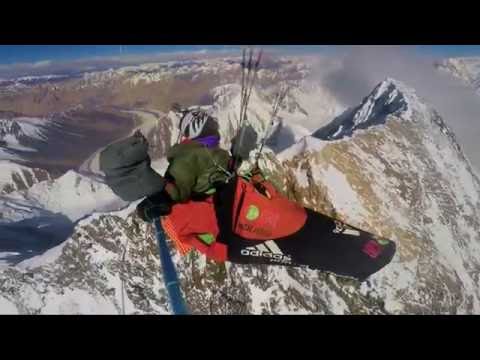