This summer's final release of zoo-reared silverspots is part of a long-running recovery program.

Oregon Zoo has released the last of more than 400 Oregon silverspot butterflies it reared at its facilities this summer.

Oregon silverspots are listed as endangered due to loss of habitat in their native northwest range along with the dwindling of the early blue violet, their larvae's host plant.

Over the past month, staff from the zoo have made weekly pupae transports to a U.S. Forest service site on Mount Hebo, in Tillamook County.

Mount Hebo has been a key site for releases of the butterfly, which has been under a recovery program that has been running since 1998.

As the accompanying video shows, zoo staff carry pupae -- protected in mesh pens -- into meadowlands on Mount Hebo, one of the last wild habitats for the silverspots. Within weeks, new butterflies will emerge and fly out into the meadow, free as butterflies.

They have to make tracks, though. They only live for about two weeks, in which time they have to find mates and find early blue violets where they can stash their eggs. Their short life will have been a complete one if they can accomplish those things. 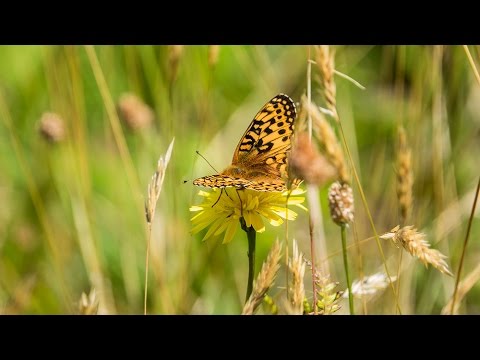 Before its habitat became depleted, the butterfly was once abundant in coastal grasses from Northern California up through British Columbia. Only five population sites remain, making the recovery effort all the more critical.

"The goal of the recovery program is to help each population grow large enough to be self-sustaining," said Oregon Zoo researcher Karen Lewis in a statement. "If it weren't for this program, three of the five remaining silverspot populations would likely be extinct."

VIEW PHOTOS: Butterflies on the Verge of Collapse

Widespread local extinctions of butterflies are expected to happen within the next three to four decades, according to new research on these insects that are key pollinators. Climate change, as well as habitat loss and degradation, are the biggest threats, according to the authors of the study, which is published in the journal Nature Climate Change. The extinctions would not only be a loss for admirers of butterflies, but they would also hurt ecosystems, affecting human well-being too. Lead author Tom Oliver explained to Discovery News that many butterfly species "provide important functions for humans -- they are part of our natural heritage, so they are important culturally, whilst they also pollinate wildflower plants." Oliver, a researcher at the Center for Ecology and Hydrology, conducted the study with his colleagues from the center, in addition to researchers from the charity Butterfly Conservation, Natural England and the University of Exeter. While the research focused on butterflies in the U.K., the scientists are also paying attention to butterfly populations worldwide. For example, Oliver said that the Monarch butterfly in North America "is thought to be declining, in large part due to loss of food plants in agricultural habitats." He says that "climate change could make this problem worse if it hastens the decline of the milkweed plants that they feed upon."

The ringlet butterfly is one of six drought-sensitive butterflies in the U.K. that is expected to experience local extinctions in the U.K. by as early as 2050. Oliver and his team gathered data from 129 sites for 28 species targeted as part of the U.K. Butterfly Monitoring Scheme. They combined this information with data on climate history, habitat, and climate projections from 17 global circulation models. Even among the most favorable greenhouse gas emissions scenarios, this butterfly and many others were found to have an extremely low probability of persistence by the year 2050.

The green-veined white butterfly is a favorite among naturalists. Aside from its natural beauty, humans can actually smell when romance is in the air for this species. That is due to pheromones released by males that smell nearly identical to lemon peels. It, and related "large white" and "small white" butterflies, were identified in the study as being at risk for local extinctions within the next three to four decades.

The large skipper butterfly is another of the six U.K. butterflies that are expected to go extinct. This is unless substantial greenhouse gas reductions are combined with better management of landscapes, such as reducing habitat fragmentation.

The speckled wood butterfly lives up to its name, given its appearance that resembles painted wood. Its population decline is expected to continue in the years to come due to increased drought associated with climate change. Oliver explained, "Severe heatwaves can affect adult insects directly, but in the case of butterflies, the larval (caterpillar) forms are much more sensitive." He added, "If their host plants dry out under prolonged severe drought then this can cause death of the larvae, or, at the very least, reduce the quality of their food so that they grow very slowly."

The Edith's checkerspot is one of two very similar butterflies that are projected to undergo local extinctions within our lifetimes. Oliver said that they are particularly vulnerable to climate change effects. One reason is that not all butterflies are able to easily recolonize after population decreases following droughts, habitat loss and other threats. Some butterflies, for example, are less mobile than others, being more adapted to very specific environments.

Don't Move a Monarch Butterfly, It Could Get Lost

The critically endangered Bay checkerspot exemplifies butterflies that have evolved for a particular habitat and climate. This butterfly used to be common in the San Francisco Bay Area, but has experienced steep population declines in recent years due to habitat loss and other threats. Butterflies are of great interest to many scientists now. Oliver explained, "Because butterflies are a well-studied group, it may be possible to use them as an indicator for the potential impacts on other groups -- a 'canary in a coal mine,' if you will." Other insects being impacted by climate change include dragonflies, bees, moths and beetles.

Bhutan glory is native to its namesake country, as well as to parts of northeastern India and Southeast Asia. Its numbers are so few now that many conservation organizations simply describe the species using one word: "rare." "There's good news and bad news here," co-author Mike Morecroft says about the study. "The good news is that we can increase the resilience of species to climate change by improving our natural environment, particularly increasing areas of habitat, and we are working hard at this (referring to efforts in the U.K.). However, this approach will only work if climate change is limited by effective controls on greenhouse gas emissions." Oliver added that "at the international level, binding agreements and actions on climate change mitigation are essential, and President Obama's new plan is certainly a step in the right direction."

Wallace's golden birdwing was formerly listed as "vulnerable" by the IUCN, but its continual decline has more recently led to an "endangered" listing. Co-author Christel Prudhomme says that efforts to save butterflies are most effective when they involve collaborations between researchers from different disciplines.

The researchers identified this tranquil spot in Dorset, U.K., as being a mini butterfly paradise. Many wildflowers exist in this side of the road, which has not been highly developed. In addition to international efforts to help save butterflies, important steps can be taken at national and local levels. "For example, individuals can reduce their personal CO2 emissions through modifications to their home, travel and consumption patterns," Oliver said. "We can also restore natural habitats to give butterflies and other sensitive species the best chances to persist under climate change. At the individual level, this includes maintaining areas in gardens and parks where wildlife can flourish: for example, by planting wildflower patches." "An important step is also to buy food which is grown in a sustainable way from companies that have sound environmental values."