Towan, a 48-year-old male hybrid Borneo and Sumatran orangutan, was a celebrity twin at birth and an avid painter in his later years.

Towan, a 48-year-old male hybrid Borneo and Sumatran orangutan, had been experiencing respiratory problems and died at the onset of a physical exam, the zoo said.

Median lifespan for orangutans is 28 years old, said the zoo, with life expectancy topping out at about 59.

The World According To Orangutans: Photos

Upper respiratory tract disease is a common, and often fatal, problem in orangutans, whether wild or captive, the zoo said. Why the disease is so prevalent is not yet well understood.

The great ape and a twin sister named Chinta were born at the zoo in 1968, the first known twin orangutans to be born in a zoo. The two were famous in their day and even appeared in Life magazine.

Something of an artist, "Towan absolutely loved experimenting with finger paints and sidewalk chalk," said zoo collection manager Pat Owen. "He was so intense during his painting sessions; he took his artwork very seriously. We'll miss his unique artwork."

Here was Towan working on his art: 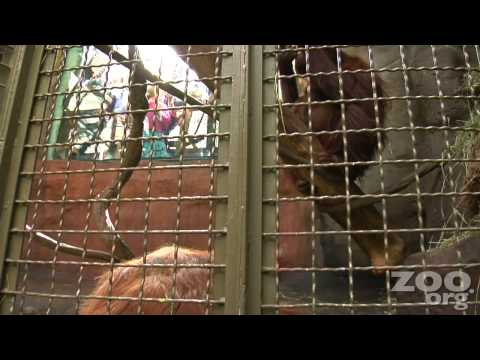 "Our big guy was an exceptionally special orangutan," said museum curator Martin Ramirez. "His passing is a deep loss for our zoo family and those who came to love and admire him as we have. As much as we regretted this day would come, he led a wonderful life, thanks to his team of dedicated keepers and animal health staff."

Towan, who passed away last week, was a crowd favorite for nearly half a century.

have destroyed an enormous amount of land. Orangutans have suffered greatly, having been driven from their homes in desperate escapes - if they're able to escape at all. This week we learned of

the story behind the photo

above. For animal lovers, it's hard to look at, but at least there's a happy ending. The photo depicts rescue workers trying to help a mother orangutan and her tiny baby, who were forced out of their forest home as a result of the fires. Escaping the flames, however, brought them face to face with villagers who attacked them with stones and tried to tie them up. Fortunately, mom and child were rescued by animal conservationists who had raced to the scene to save the great apes. In honor of this brave mother-child combo, let's learn a few tidbits about orangutans and appreciate them in less harrowing settings.

There are two species of orangutan: Sumatran and Bornean. The former hails, of course, from Sumatra and the latter from Borneo. Sumatrans have longer hair and are a bit lighter in color, while the Borneans are usually heavier, with shinier hair. Sumatran males and females usually grow beards as they get older. In most cases, only Bornean males sport beards.

Unlike other great apes that socialize frequently in groups, such as gorillas, orangutans, while they will hang out together, tend to have generally more solitary natures. Perhaps that explains the often philosophical look in their eyes. Maybe they are pondering great things only they know about.

Orangutans get the most out of their childhood, compared to other great apes. They stay close to mom for their first 8 years or so. They get around fine on their own during their wonder years, but they'll keep an eye out for mother nonetheless.

Orangutans spend most of their lives in trees, swinging among branches, using leaves as shelter. They have long fingers and toes, and their arms are about as long as their legs -- almost touching the ankles when these ruddy primates stand up. They build new nests most nights, although they've been known to use the same one more than once.

See those giant cheek pads on either side of this fella's face? They're called flanges, a feature seen on some adult males, usually the dominant ones. Flanges are larger on Bornean orangutans than on the Sumatran edition.

'Cheeky' Male Orangutans a Hit with the Ladies

Younger orangutans on Sumatra need to keep a sharp lookout for attackers, if they leave the trees. They can be prey for tigers, leopards, crocodiles and snakes. Bornean orangutans don't have to worry quite so much about taking ground trips: Those predators aren't part of their habitat.

Orangutan Figures Out How To Communicate Like A Person

Female orangutans will stand about 45 inches tall, the males 54 inches. The guys, at about 190 pounds, far outweigh the ladies, who are comparatively petite, at about 80 pounds. When they're born, they'll weigh around 3.5 to 4.5 pounds.

It's estimated that more than half of an orangutan's diet consists of fruit. Figs are a particular favorite. But when there's no fruit to be had, they'll also eat leaves, honey, bark, and insects. Bird eggs, too.

See what we mean about that faraway, philosopher's gaze? And see those thumbs? Opposable -- just like ours. Unlike us, though, their big toes also do the opposable thing.

Here's hoping these shaggy red wonders are able to keep hanging on. Sadly, that's not an ironclad-safe bet. The Sumatran orangutan (

) is listed as Critically Endangered on the IUCN "red list" of threatened species. That's thanks to loss of habitat to logging concerns. Bornean orangutans (

), meanwhile, are listed as Endangered, due to loss of habitat to agriculture and to fires,

as we have seen