A specialized form of radiation treatment was used for a sarcoma on the face of the 40-year-old animal named Tess.

A 40-year-old penguin from Pueblo Zoo that hatched when "All in the Family" was the top-rated television show underwent a specialized treatment for skin cancer at Colorado State University (CSU).

Tess, the world's oldest known African penguin, had a sarcoma between her beak and right eye. Veterinarians at the university trained a tiny shaft of radiation at the growth for just shy of 22 minutes. The treatment, electronic brachytherapy, is able to focus the beam of radiation so precisely that tissues and organs surrounding the area aren't affected.

The procedure was so non-invasive, in fact, that Tess was out the door and on her way back to Pueblo Zoo the same day. After two weeks of isolation in which to recuperate, she was placed back in her habitat, where a reunion ensued with her 33-year-old mate Mongo. The video below has some terrific footage of Tess and her treatment. 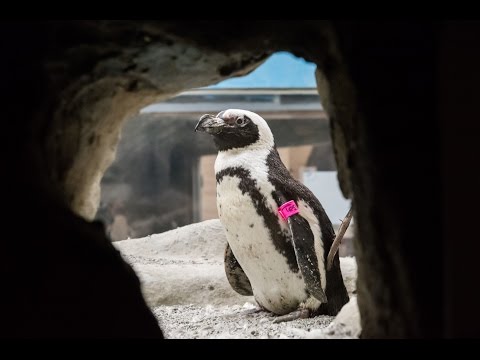 The zoo's primary penguin keeper, Melanie Pococke, said it was fortunate that Tess' tumor was in a place where it could be seen readily. Otherwise, it would likely have been hidden in her dense feathers. "I have always known that Tess is spectacular and extremely special. It was fun to see the excitement everyone had for her at the CSU vet hospital," she said in a statement.

Skin cancer is rare to encounter in captive penguins, according to Pueblo Zoo. The facility reports that Tess is in otherwise excellent health, though, noting that her age is a marvel, given that African penguins don't typically live beyond 20 years in the wild.

African penguins are native to the coastal waters of South Africa. They're in sharp decline due to shifting food source availability and other challenges, and experts believe they may disappear from the wild within 20 years. Luckily, the Pueblo Zoo says successful captivity programs at facilities such as theirs mean the animals could be bred for the next 100 years, and that one day reintroduction into the wild might be possible if necessary.

Penguins! Unlike the dodo, this flightless bird has figured out how to make a go of it, capturing our hearts into the bargain. With winter well underway, and a historic blizzard pummeling the east coast as we speak, what better time to chill with some pictures of penguins? Enjoy these amazing creatures!

Once waterbound, penguins are fantastic swimmers that can zoom through the ocean at some 15 to 20 miles per hour.

There are 18 species of penguin, ranging in size and even color.

It can vary a bit by species, but wild penguins can live from 15 to 20 years or so.

Emperor penguin siblings take in the scenery. The Emperor is the largest species of penguin. When these two grow up they'll weigh around 75 pounds and stand about 3 feet 7 inches tall.

Emperor penguin chicks will begin to fledge once they hit about half their adult size.

This nest has a mouth to feed. Penguins eat krill, fish, squid and other types of marine life they can fetch while underwater.

This African penguin, found on the continent's southwestern coast, is also called a jackass penguin, although it won't answer to that name.

Penguins are quite nearsighted when on dry land. It's underwater where their vision really steps it up. There, they can really hone in on the colors of the ocean such as blue or violet. Such eyesight helps them avoid being eaten by killer whales or leopard seals, their chief predators of the deep.

King penguins, that is. They're the second-largest penguins, after the Emperors.

Penguins do enjoy a crowd. The Southern hemisphere wins the penguin population census. It's tempting to think penguins mostly hang out in Antarctica, but they're actually all over the lower half of the planet, and further north than you might guess. From islands in the South Pacific, to Australia, New Zealand, South America and South Africa, you can find penguins making a living. There are even three species that call places as far north as the Galapagos Islands home.

Should this gang on the ferry ride decide to go for a swim, they could stay underwater for about 15 to 20 minutes and go as deep as nearly 300 feet (91 meters).